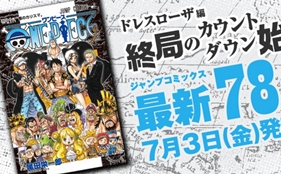 On the Oricon Charts for this week, it has been shockingly revealed that the 78th volume of Eiichiro Oda’s One Piece manga sold over 1,676,264 copies. The amount sold 8,000 copies more than volume 77, with 1.668 million last April 13 report. This makes the 78th volume of One Piece the best record for first-week sales. The 78th volume was released on July 3, 2015.

One Piece manga began under Shueisha’s Weekly Shounen Jump on July 22, 1997. An anime produced by Toei Animation began airing on October 20,1999 and will have 701 episodes this week. Synopsis of One Piece manga from MAL:

Gol D. Roger was known as the Pirate King, the strongest and most infamous being to have sailed the Grand Line. The capture and death of Roger by the World Government brought a change throughout the world. His last words before his death revealed the location of the greatest treasure in the world, One Piece. It was this revelation that brought about the Grand Age of Pirates, men who dreamed of finding One Piece (which promises an unlimited amount of riches and fame), and quite possibly the most coveted of titles for the person who found it, the title of the Pirate King.