Every season, there are a bunch of OVAs that get released for anime that had previously aired. Most of the time, they are ones I’m not interested in, either because I haven’t watched the anime or I don’t feel the need to watch another episode. However, three OVAs came out fairly recently that interested me. 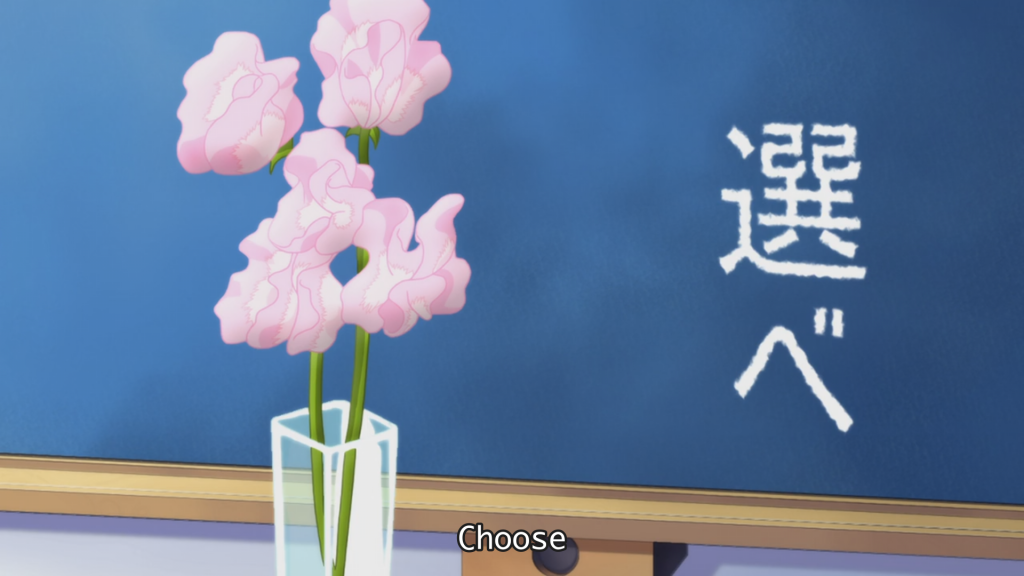 This one’s a little bit older, but I don’t believe it was translated until recently or I just wasn’t aware of it being done until now.

Normally, I hate fan service. Constant breast and panty shots annoy me to no end. So you probably wouldn’t have expected me to like Ore no Nounai Sentakushi ga, Gakuen Love Comedy wo Zenryoku de Jama Shiteiru (NouCome for short). NouCome is moe and fanservice incarnate. If someone wanted to know what a moe anime is, please point them at NouCome. Cute girls, big breasts, loli teachers, and a harem is pretty much everything you need to know about this anime. But, the twist in NouCome is that the male protagonist is forced to make random choices, called the “Absolute Choice”. If he doesn’t, he is forced to endure pain until he decides on one choice. But, these twists are usually perverted in nature which leads to absolutely hilarious moments of fan service that can’t be taken seriously at all. For example, one episode is devoted to him having to look at a girl’s panties or he won’t be able to get rid of his choice problem.

However, the anime constantly censors the panty shots until he just looks at a pair of girl’s panties that gets tossed to him. Then they show the girl’s panties. It was crazy scenarios like that that made the anime so enjoyable to watch and, if I had to make a list of my top 10 comedy anime, this would make it on there. It was fanservice done right, and that’s why I loved it so much. So obviously, I was excited for the OVA. The anime itself was also shorter than most, being only 10 episodes. I wanted to watch more after I had finished it.

The OVA could potentially take place at any point in the timeline, but I would assume it would be near the end or after the ending of the anime. In the OVA, the male protagonist, Kanada Amakusa, gets sucked into a visual novel after the Absolute Choice popped up again. He has to reach the end of the novel before he can leave. However… the Absolute Choice never specified which ending he’s required to get…

This seems like a simple task to accomplish, especially since he has previously played through the particular visual novel. However, instead of the in-game choices, the Absolute Choice has its own idea of how to play the game. The situation plays out in a perverted fashion, which makes his situation funny as he gets more desperate. In addition, a couple of the characters have been changed with the main cast of girls from the anime which confuses him because they act like themselves instead of the characters from the game.

This OVA was worth it for me, even though I felt like the tone was taken a little too seriously. The fan service felt forced, like it came out of any other anime instead of the unique style the rest of the anime had. Regardless, it was worth it just for the last two or three minutes since that’s when I laughed the most. That’s where I felt like I was watching my good old NouCome again. I still hold out hope for a second season, or at the very least, more specials or OVAs. 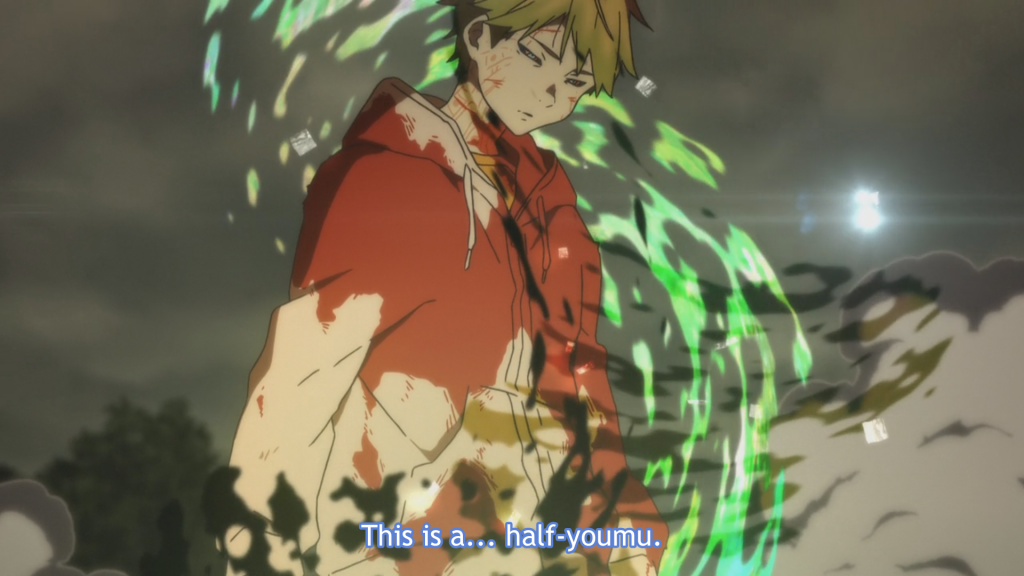 Kyoto Animation is known for their cutesy slice of life anime. I myself am a big fan of their anime – they’re my favourite animation studio. They have great art, animation, and most of the time, have great OPs and EDs. Kyoukai no Kanata is a bit of a departure from their usual routine. While it does contain slice of life elements, the majority of the anime is based on fantasy. Kyoukai no Kanata is the first anime since Munto in 2009, that is not slice of life focused. Kyoukai no Kanata‘s plot involved humans called Spirit World Warriors fighting against monsters called youmus. The story is focused on Akihito Kanbara, a half-human, half-youmu and Mirai Kuriyama, a Spirit World Warrior that uses an ancient and hated way of fighting. KnK had a decent story, but Kyoto Animation got bogged down with doing slice of life episodes that they didn’t end up having time to properly do the story justice. Aside from the two protagonists, I found the other characters uninteresting. However, in typical Kyoto Animation fashion, the art and animation was top-notch. The action scenes were amazing to look at since everything ran so smoothly. In addition… Mirai Kuriyama was just way too cute… Anyway, let’s get to the OVA.

The plot of Episode 0 is in its name, it takes place three years before the start of the anime. This is the story of how Akihito met Mitsuki Nase and Hiroomi Nase and the events that led up to the start of the anime. Hiroomi was given the task of taking Akihito into protective custody because of his half-human, half-youmu abilities. There was another reason to take him in as well, but that’s a spoiler for the anime.

I can’t really talk more about the episode itself because it really does help lay the foundations for the start of the anime. All of the remaining questions I had about the story of the anime was laid to rest after I watched this episode. It explained a lot, and I feel if this episode was included somewhere in the anime itself, it would have been so much better. If you watched Kyoukai no Kanata, you really should give this a watch.

Girls und Panzer OVA: This is the Real Fight Against Anzio!(Released July 5th, 2014) 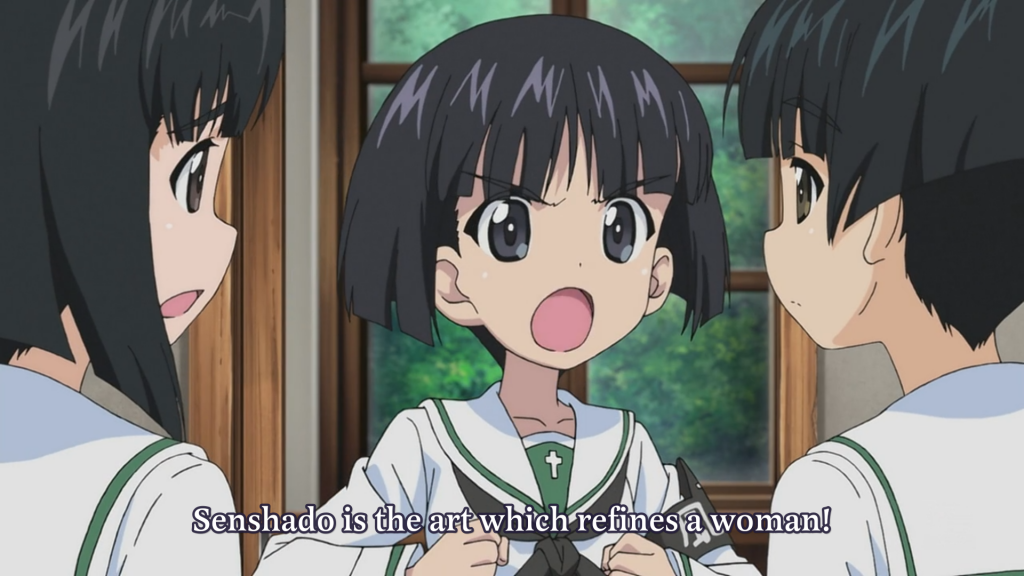 Just the very premise of Girls und Panzer made me raise my eyebrows. Girls driving tanks, and taking part in actual tank battles? In addition, only girls are allowed to take part in this after-school activity? Okay… However, once I turned my mind off to the ridiculous premise, I was actually treated to a good story. The plot of the anime is that these girls from this school must take part in a national tournament and become the champions. It’s a simple story and episodic in nature, but it was done very well. The tank battles and the recreation of classic tanks was done with such a great attention to detail. This university history major has to tip his hat to the animation team. The OVA was meant to address one fight in particular; the fight against the school, Anzio. In the anime, they spent an entire episode building up to the Anzio fight. But, once their preparations were complete, they skipped to the end of the fight and didn’t even show a second of action. It left me wondering if somehow I had an incomplete copy of it, but that was actually it. I was disappointed that they had skipped out on the action.

The OVA goes more into detail on the Anzio battle: the build-up to it, the preparations, and the battle itself. They introduce the girls from Anzio, which is always something they do before the fight in each episode. They also go into a bit more of the story and answer a couple of minor questions I had after watching the anime. Another thing to note is that this OVA is 37 minutes long, which means they really had time to go in depth with the fight and we’re treated to a great battle. For what the OVA was, it was very enjoyable and it was nice to see that missing part of the anime put back in.

If you’re a fan of these anime, I would recommend checking them out because they were enjoyable watches. They help improve on the story and answer questions that were left over after the anime finished.