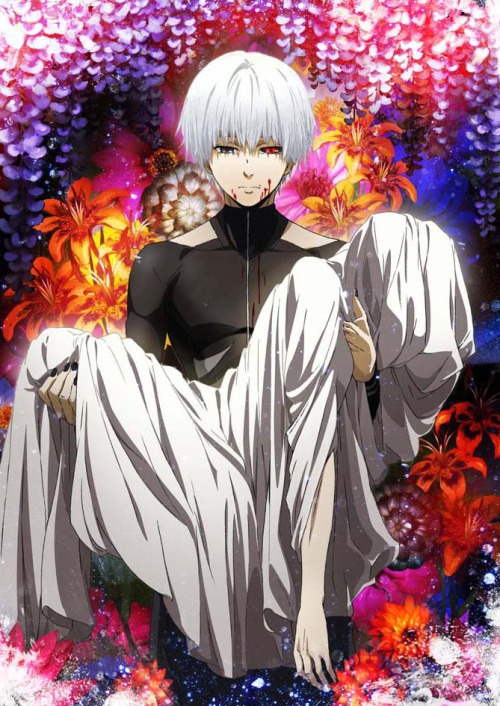 Highly anticipated series Tokyo Ghoul releases its second season only a couple months after the first – and with that cliffhanger ending from the last, we’re glad it’s finally out! Given the name Tokyo Ghoul √A (Tokyo Ghoul Root A), this season, although a continuation of the last, veers off from the story of the manga. While this came as an unpleasant shock to many, there are some who are curious as to what it means for the show. The fact that its written by the original creator allows room for some hope to shine through. It may yet be just as good; possibly better?

To start off on a relatively negative note, one will definitely ask how a show manages to go from having the best opening from last year to having such a boring one this season. As it’s the first aspect of the show one notices, it should give one a sense of excitement, foreboding, or at least be representative of the show itself in some way. It can be argued however that the relatively mellow and sombre tone of the song is meant to mirror the Kaneki that is now at peace with himself – at peace with the fact that he is a ghoul. The track certainly manages to deliver in that regard. The animation for it still leaves a lot to desire, however once again, the relative motionlessness of the animation could mirror the generally more peaceful inner consciousness of Ken Kaneki. The first opening could represent the chaos and turmoil that tore him apart as he struggled with his new self in the first season, while this opening could represent the eventual acceptance. Furthermore, the emotional state and seeing inside his head (as shown in episode 12 of the first season) is a constantly running theme in Tokyo Ghoul. The choice of the opening could in fact be a poetic one.

In terms of the content of the episode itself, it’s an entirely different story. It continues exactly where the first season left off, and our man Ken Kaneki is as badass is ever. Fans who were waiting for the shift in Ken’s personality will not be disappointed, as the action sequences with him are phenomenal.

Filled with fight scenes, sweet visuals, great use of soundtrack and minimal but tasteful dialogue, Tokyo Ghoul Root A started with a bang – almost literally. Several old faces are seen while a slew of new ones are introduced. As the battle between Anteiku and Aogiri rages on, humans are caught somewhere in the middle of this war they cannot even comprehend and Kaneki is the center of it. The episode could have made a great last episode for the previous season as well, as its ending was just as ambiguous yet exciting as the last, teasing the audience with more to come and ending with a twist. Without giving too much away, the episode is sure to impress fans, so as long as it is watched with an open mind and one doesn’t scrutinize or compare with the manga too much.

Answering a few questions while creating several more (some of which are questions about the multiple costume changes Kaneki makes without anyone really understanding where or how) Tokyo Ghoul Root A is the much needed climax we needed for the first season of Tokyo Ghoul.

Some feared Kaneki would go back to being a weakling after one fight and the show would start from scratch, but this certainly was not the case. If you’re a fan of the series, Tokyo Ghoul Root A is definitely worth watching. Barring the underwhelming opening, the episode was excellent.

How did you like the first episode of Tokyo Ghoul Root A? Let us know in the comments section! Until then, Tomoki the Toronto Ghoul signing out!