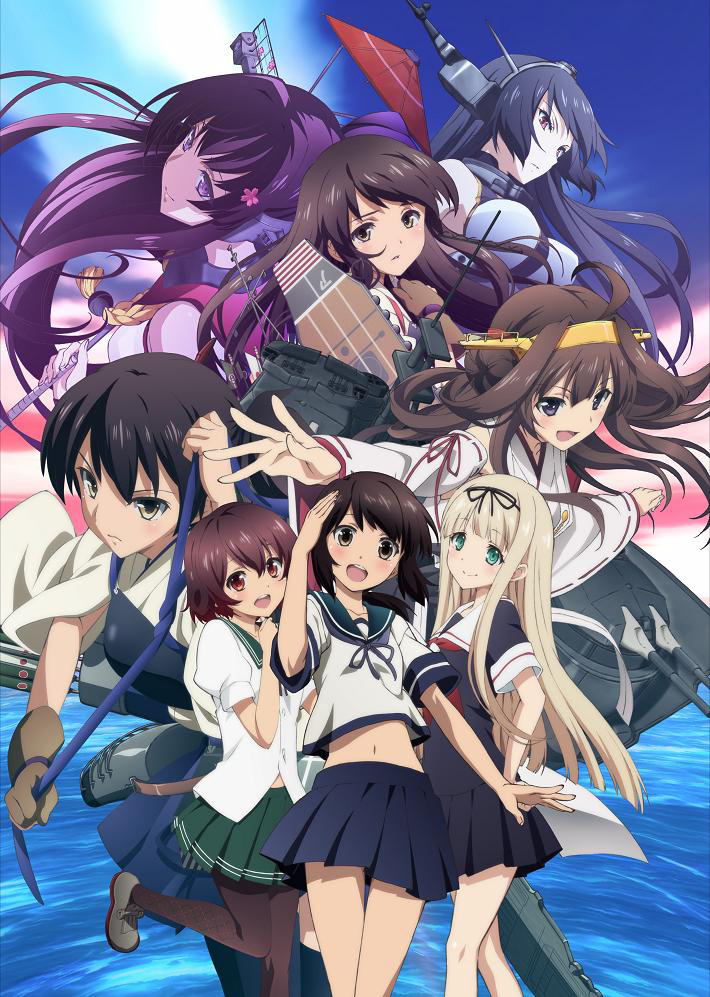 If you’ve been following what games are popular in Japan, you’ll probably notice Kantai Collection being one of the latest games to get Japan hyped up. Kantai Collection (referred to from now on as KanColle) is a free-to-play card-based browser game developed by Kadokawa Games that has split off into multiple different media forms including manga, light novels, and now an anime along with a PS Vita game in the pipeline for later this year. This game puts girls that use the power of World War II ships against another fleet. The game is based heavily on RNG (Random Number Generator), and battles usually come down to having a high-level fleet, good equipment and more than a little luck. The anime was announced back in 2013, with a projected release date of Fall 2014. However, it was pushed back to Winter 2015. Now that Winter 2015 has arrived, it’s time to for the rest of the world to experience KanColle in anime form.

The story of this version of KanColle is this: Aliens called ‘Abyssals’ have taken over the seas and laid waste to human ships, effectively taking away humans power in the sea. The only ones capable of taking on these aliens are fleet girls born with the power of ships of old. Using their outfitted weapons with the ability of their respective ships they fight to regain control of the ocean. This story follow Fubuki, a special class destroyer, as she enters basic training at a naval base. She enters the Third Torpedo Squadron. On her first day, she meets her fellow squadmates along with other girls including Akagi, whom Fubuki admires. Akagi is part of the elite 1st Carrier Task Force, a squad renowned for winning many tough battles unscathed. Before she can get it any training, she is called out to a sortie with her squad against enemy destroyers. Since Fubuki has no combat experience, she soon becomes a liability with her squadmates forced to bail her out with the help of Akagi’s squad. Unwilling to be a burden on her squadmates, she resolves to train hard and one day be worthy enough to be placed alongside Akagi.

Prior to the first episode, the producer for KanColle said that the anime would be roughly 70% moe/slice of life with the other 30% being action. Depending on what you were initially expecting out of this anime, this may or may not surprise you. Personally, I’m drawing comparisons of this anime to Girls und Panzer, since they seem to be very similar in their execution. I’m not expecting this anime to be too story-heavy considering the source material, so I would suggest to also not expect an amazing story. Of course, it could still surprise me like Girls und Panzer did. The art style looks nice to me, and the animation is decent. The better animated parts are the CG action parts. CG just seems to work better during action scenes as it looks a lot more fluid than hand-drawn animation. The soundtrack is all right so far, but both the OP and ED were not in the first episode so I can’t judge them yet. This anime is going to bring out the versatility of the voice actresses involved as some of them play up to nine characters. Rina Hidaka (Silica from Sword Art Online) has the most roles from the game, voicing eleven characters. Seven of Ayane Sakura’s (Mika Shimotsuki from Psycho-Pass) characters appear in the first episode. I’m looking forward to playing mix and match with the voice actresses.

Overall, if you’re looking for cute girls with a side of action, this is for you. Like most video game adaptations, this show is more meant for fans of the game as they are more knowledgeable with the world. However, I still think newcomers can still watch this as long as you don’t expect a groundbreaking story to come out of it. If none of the above conditions satisfy you, then this show won’t be your cup of tea. I personally will continue watching it, if only because I will be surrounded by it. I know a few KanColle players and they’ll reveal every detail about the anime anyway.

For those who have watched the first episode, what are your thoughts on it? Let me know in the comments!