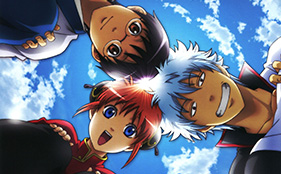 The first trailer for Gintama 2015:

In addition to this, the main staff was also revealed earlier: