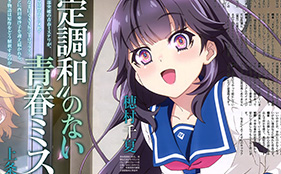 The opening and ending animation sequence for the anime adaptation of Sei Hatsuno’s HaruChika novel series has been previewed. The opening theme is titled “Niji wo Ametara” and is performed by fhána while the ending theme “Kuusou Triangle” is by ChouCho.

The website also revealed brand new visual for the upcoming January series. This was accompanied by news that pop band fhána’s opening will be called “After the Rain, The Rainbow” and singer ChouCho’s ending will be called “Imaginary Triangle.” The singles for both will be released January 27th.

In addition to this, a visual of the series has also been featured as a double page spread in the December 2015 issue of Japanese magazine NewType.