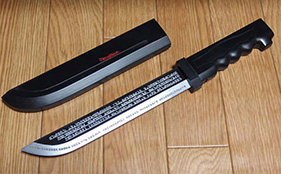 Anisong DJ Nachtgrief has recreated Bell Cranel’s powerful knife which was forged by Hephaestus from Fujino Omori’s Danmachi light novel series. Nachtgreif noted that since he isn’t Bell, he had to use a little help to make the plastic knife glow. In other news, Hestia has been taking over Japanese anime magazines such as Animedia, Dengeki G‘s, NewType, NyanType and Megami: