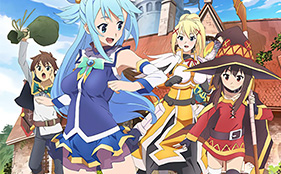 The opening animation sequence anime adaptation of Natsume Akatsuki and Kurone Mishima’s Kono Subarashii Sekai ni Shukufuku wo! (Give Blessings to This Wonderful World!) light novel series has been previewed. The opening theme is titled “fantastic dreamer” and performed by Machico.

The Kono Subarashii Sekai ni Shukufuku wo! anime will started its broadcast from Thursday January 14th at 1:05am JST on Tokyo MX, airing every week in that timeslot. The series will also air on Sun TV at 1:30am JST. The anime also aired on Chiba TV and TVK at 1:00am JST on the following day, with a TV Saitama and Mie TV broadcast with the hour.