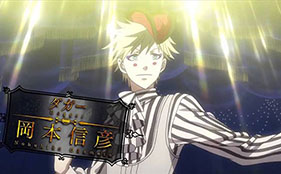 A new video has released for the anime Kuroshitsuji: Book of Circus. The video is a TV spot/commercial for the adaptation of Yana Toboso’s manga Kuroshitsuji (Black Butler). The anime will be adapting the Noah’s Ark Circus Arc from the manga. In addition to Book of Circus, an OVA titled Book of Murder was announced earlier in the year. The anime will be directed by Noriyuki Abe (Bleach, Gakkou no Kaidan) with Hiroyuki Yoshino (Strike the Blood, Accel World) handling the series composition and Minako Shiba (Black Butler, Madlax) designing the characters. The series will once again be animated by A-1 Pictures (Fairy Tail, Sword Art Online).

Synopsis for Kuroshitsuji: Book of Circus from Haruhichan.

The TV series is subtitled Book of Circus and will air July 2014 in the Animeism block. It will adapt the Noah’s Ark Circus Arc, picking the manga story back up from the point at which they diverged.

This arc immediately follows the Curry Contest Arc in the manga, which ended at episode 15 in the first season of the anime.