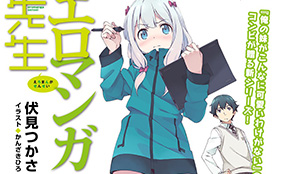 The Dengeki Bunko imprint published a handout that revealed that Tsukasa Fushimi and Hiro Kanzaki’s Eromanga-sensei light novel series will be adapted into an anime series. Fushimi and Kanzaki are known for writing and illustrating the Ore no Imouto ga Konnani Kawaii Wake ga Nai (My Little Sister Can’t Be This Cute) light novel series. Eromanga Sensei is a Japanese light novel series written by Tsukasa Fushimi and illustrated by Hiro Kanzaki. The series began being published under ASCII Media Works’s Dengeki Bunko imprint in 2013; five volumes have been released as of March 2016. A manga adaptation illustrated by Rin began serialization under the Dengeki Comics imprint in November 2014; the manga has been compiled into three tankobon volumes as of March 2016. An anime adaptation has been announced.

The “new sibling romantic comedy” revolves around Masamune Izumi, a light novel author in high school. Masamune’s little sister is Sagiri, a shut-in girl who hasn’t left her room for an entire year. She even forces her brother to make and bring her meals when she stomps the floor. Masamune wants his sister to leave her room, because the two of them are each other’s only family.

Masamune’s novel illustrator, pen name “Eromanga”, draws extremely perverted drawings, and is very reliable. Masamune had never met his illustrator, and figured he was just a disgusting, perverted otaku. However, the truth is revealed… that his “Eromanga-sensei” is his own younger sister! To add to the chaos that erupts between the siblings, a beautiful, female, best-selling shoujo manga creator becomes their rival!