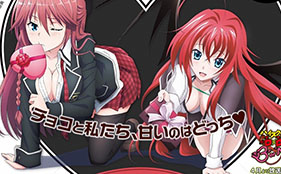 This new visual is now live on Trinity Seven‘s official website and will stay up until February 20, 2015.

Along with the key visual: