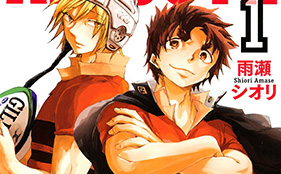 The official website of the upcoming TV anime adaptation of Shiori Amase’s All Out!! manga has announced the first cast members of the series. The announcement is also being published in the latest issue of Morning Two magazine, which went on sale on November 19. The magazine also revealed that these four cast members will be featured in an upcoming drama CD. All Out!! synopsis from MAL:

Gion Kenji is short and perpetually pissed off about it. Iwashimizu Sumiaki is tall but timid. Although it’s bullies that bring this unlikely pair together on the first day of high school, it’s the rugby club that will make them friends. All Out!! is adapted from the manga of the same name by Shiori Amase. It has been serialized in Morning Two since November 2012. The anime adaptation is scheduled to air in 2016.