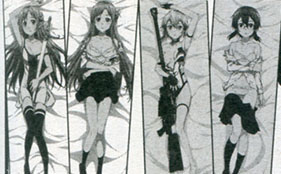 It has been announced that various goods will be sold at this Summer’s Comiket 86 doujinshi mega-event which include a Sword Art Online Asuna and Sinon Dakimakura by Kadokawa. Various Gochuumon wa Usagi Desu ka? goods have been presented at the Rundo Robe booth and have been previewed and they include the items below. Gochuumon wa Usagi Desu ka? bed sheets A and B in action: Which Dakimakura would you choose? Asuna or Sinon? Or which product from above? Let us know in the comments below!