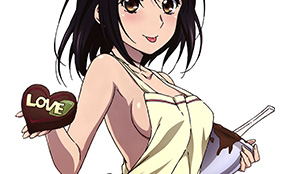 Yukina Himeragi from Gakuto Mikumo’s popular Strike the Blood anime series has been featured as a poster in the March 2016 issue of Megami. You can purchase this issue here (get 5% off with coupon code MOE-N3Y-4YW0QK).

She was also featured in the February 2016 issue of Megami as a poster. This issue can be purchased here (get 5% off with coupon code MOE-N3Y-4YW0QK) and you can view the other posters that came in this issue here.

In addition to this, the second part of the OVAs released on December 23rd. Bonuses that was included for buying them at Animate, Gamers, Toranoana, Sofmap, TSUTAYA, HMV and Tower Records is a pair of interlocking clear posters, which the series site has previewed.

In addition to this, a new promotional video for the OVA was streamed:

The OVA’s first part will be released via Blu-ray format priced at 5,900 ($47.5) yen and DVD format priced 4,900 ($39.48) yen. The second part of the OVA was released on December 23, 2015. It has also been announced that Yuka Iguchi (Toaru Majutsu no Index‘s Index Librorum Prohibitorum) will sing the OVA’s opening song, while Kanon Wakeshima will perform the ending song.