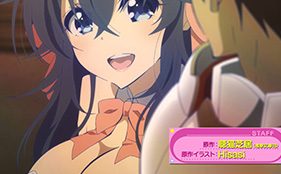 The official website for the TV anime adaptation of light novel Netgame no Yome wa Onnanoko ja Nai to Omotta? (And you thought there is never a girl online?) began streaming a promotional video on Tuesday which previews the opening theme song “1st Love Story” by the five-member idol group Luce Twinkle Wink☆.

The cast with their character designs includes:

In addition to this, the website recently unveiled a new visual: