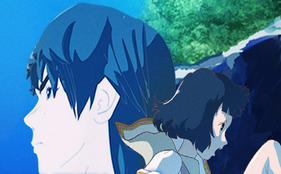 On October 23rd, 2014, the official website for the anime short Matsuyama City began streaming the sequel to its 2013 original short.

The original short Mattsu, Yamma and Moburi – The Mystery of the Seven Gems and the Flying Castle follows three kids named Mattsu, Yamma, and Moburi as they try to recover seven jewels from Matsuyama’s famous attractions. Matsuyama is located in Ehime Prefecture on the island of Shikoku in the country of Japan. The short features subtitles in English, French, German, Korean, and Chinese.

The sequel is titled Mattsu, Yamma and Moburi – The Naval Treasure and Riddle Island, and it follows the three main characters from the first short as they are transported to a floating version of Nakajima, a city that was merged with Matsuyama in 2005 and is no longer an independent city, and the surrounding islands west of Matsuyama. The three main characters decide that they need to return to Matsuyama City, but on their way back encounter the mysterious Alan Shirohama (named after the GENERATIONS from EXILE TRIBE band member Alan Shirahama who voices the character).

Mattsu, Yamma and Moburi – The Mystery of the Seven Gems and the Flying Castle:

Mattsu, Yamma and Moburi – The Naval Treasure and Riddle Island:

The production cast is as follows: