We’re about a quarter/third of the way through this season, so it’s time for me to give my thoughts on what I am currently watching. In typical fashion, I’ve picked out a few comedy/slice of life anime to watch. That’s pretty much all I’m interested in for those who were wondering why my list is so small. The anime I’m watching this season (so far) are: Denki-Gai no Hon-ya-san, Amagi Brilliant Park, Shirobako, and Girlfriend (Kari). 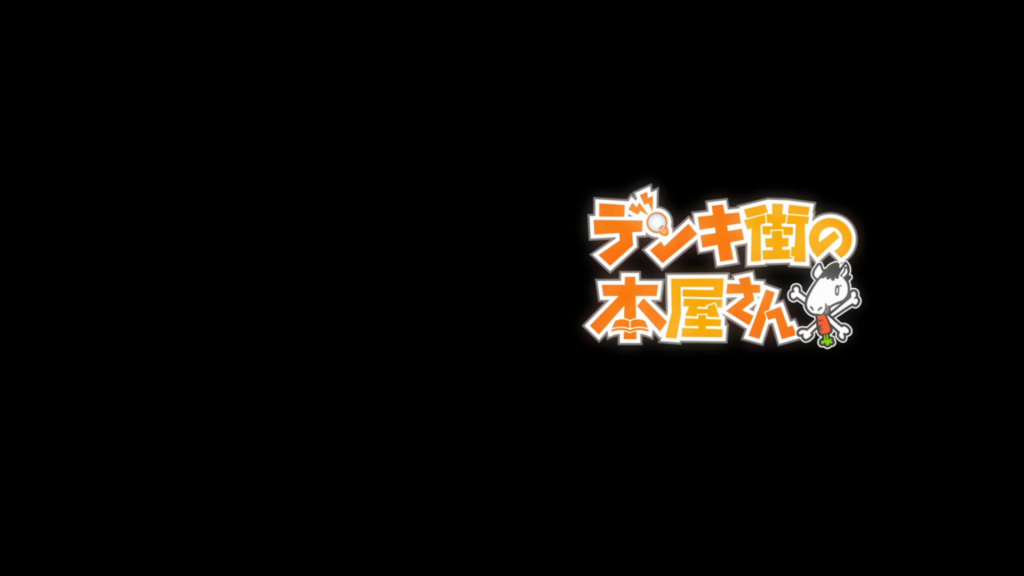 Denki-Gai is a tough anime to to really get into. Its humour relies heavily on the viewer’s understanding of ero manga and general otaku culture. Or you could get into it for the cute girls. There’s that too. This anime follows a manga store’s employees as they live out their otaku lives. As I mentioned, this anime is geared towards those who understand this kind of culture or are at least familiar with it. Otherwise, the jokes are going to fly over people’s heads and they’re not going to understand it, or they could find it offensive. For me, the humour is so over-the-top that it goes past being offensive and it enters the realm of ridiculousness. There was one episode devoted to what I can only describe as “otaku Olympics”, in which the employees take part in various ridiculous activities like rolling a giant ball, or “wife-carrying” where instead of holding an egg on a spoon, it’s a figure of the male characters’ favourite female character (waifu).

After the first two episodes of ridiculous humour, things settle down and they begin to focus on the characters. All of the characters in this anime have some kind of close relationship with another character, and the past couple of episodes have been focusing on these relationships. It’s a nice change of pace, and it makes the characters more interesting. The characters themselves are also nice and diverse, which creates interesting dialogue between characters. The anime does a decent job in the other departments. Despite having established voice actors like Ayana Taketatsu and Yoshitsugu Matsuoka, alongside rising star Ryota Osaka, these aren’t their best roles. Props go out to the less well-known voice actors for their good jobs in this anime. 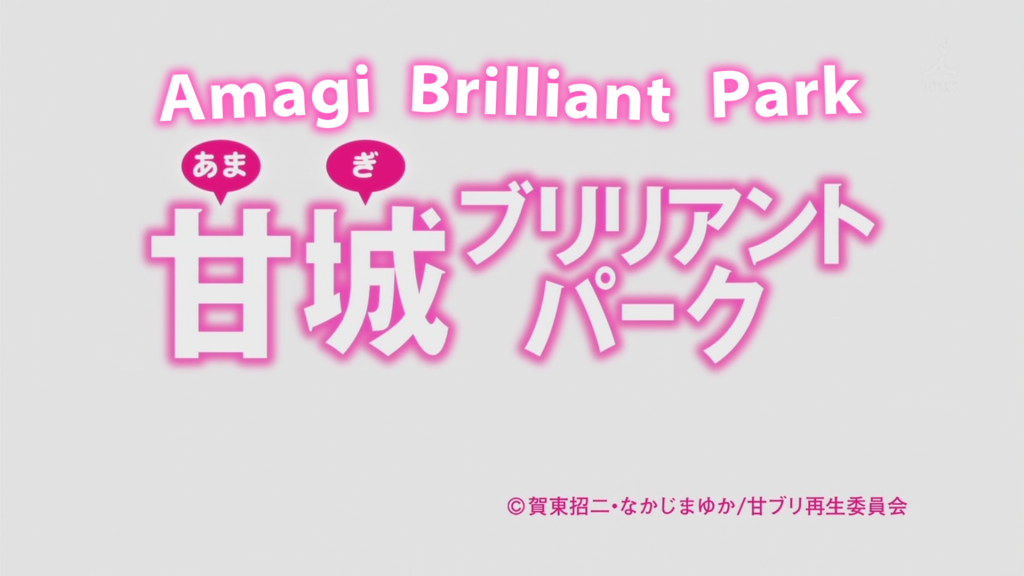 I’ve already given my first impressions of this anime, so I’m just updating my feelings on it now.

I feel that even though it started off slowly, it has been getting better each episode in my opinion. With the story and the characters getting development, I can see this becoming a good anime. Everything has been progressing at a nice pace. Hopefully Amagi Brilliant Park can stay on its current course as it is interesting now. 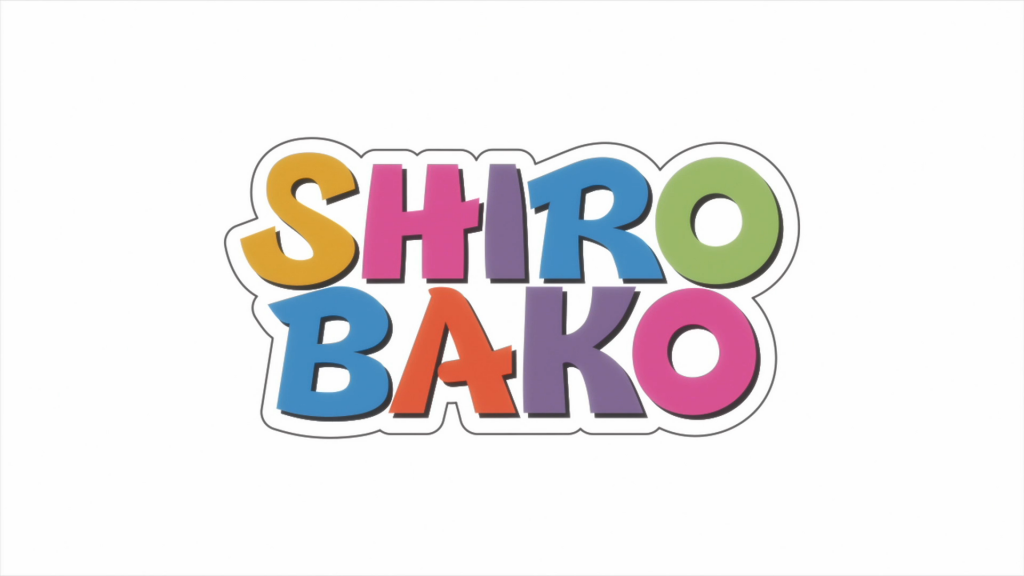 How a studio can go from creating one of my all-time favourite anime (Nagi no Asukara) to one of the worst anime I’ve ever watched (Glasslip) in one year is beyond me. Thanks to Glasslip, I now have an almost complete spectrum of anime I like/dislike from P.A Works. Nagi no Asukara (love), Angel Beats (like), Hanasaku Iroha (dislike), Glasslip (hate). The only thing I’m missing is an anime that I think is just all right. Shirobako so far, looks like it might complete that spectrum.

Five high school girls create an anime in their last year of school, and they vow to work together in the future to create their own anime that will air on TV. Fast forward two and a half years later, and it focuses on one of the girls, Aoi Miyamori. She has managed to get into an animation company, as has one of her friends. From here, it follows her, and her co-workers’, frantic life working at an animation company as an assistant. 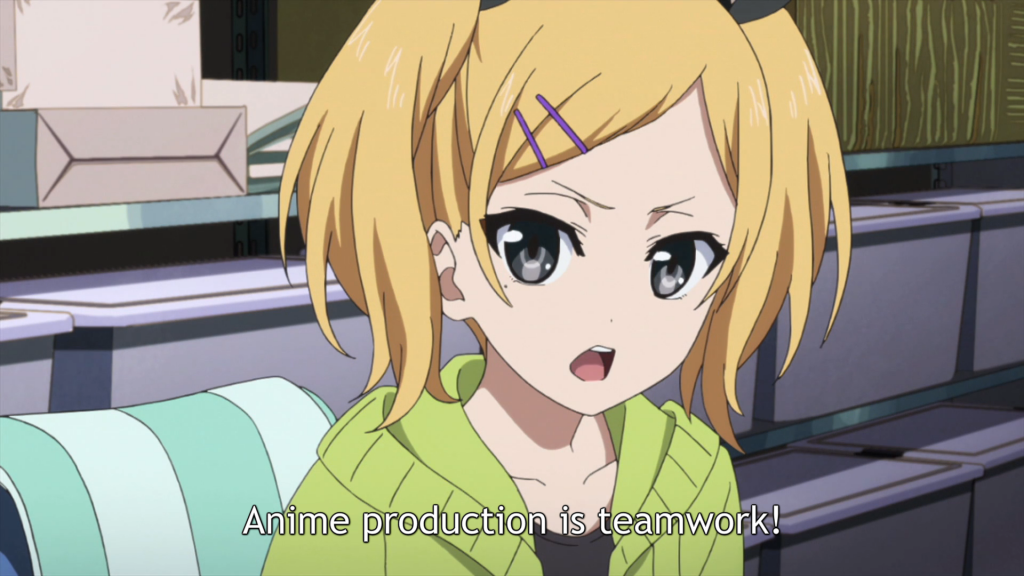 If anything, Shirobako is an educational experience if you were ever curious about how anime is actually created. I’m enjoying myself just by watching how much actually goes into creating just a single episode. Of course I know how expensive anime is to produce and I know animating is a crazy hard thing to do, but this is giving me an inside look as to how this all works. Shirobako, for me, is interesting on this premise alone. The story is simple, follow Aoi’s life as an assistant and watch an anime being produced and the lives of those who make them. Shirobako is another original anime by P.A Works, making this the third one in a row. As such, it uses the same kind of artstyle as Nagi no Asukara and Glasslip. It doesn’t look nearly as good as those two, but I still find it appealing. Sound wise, nothing has stood out. It’s all par for the course. The characters are decent enough I suppose. There is the issue of two of the five girls at the beginning who haven’t shown up since the first five minutes. However, given that the anime has an unspecified number of episodes, this could be a two-cour anime. If that’s the case, then I’m all right with the somewhat slow pace and how a couple of the main characters haven’t shown up yet.

Right now, Shirobako is a decent anime. It’s not good, but it’s also not bad. If this ends up being a two-cour anime, things could change later on. 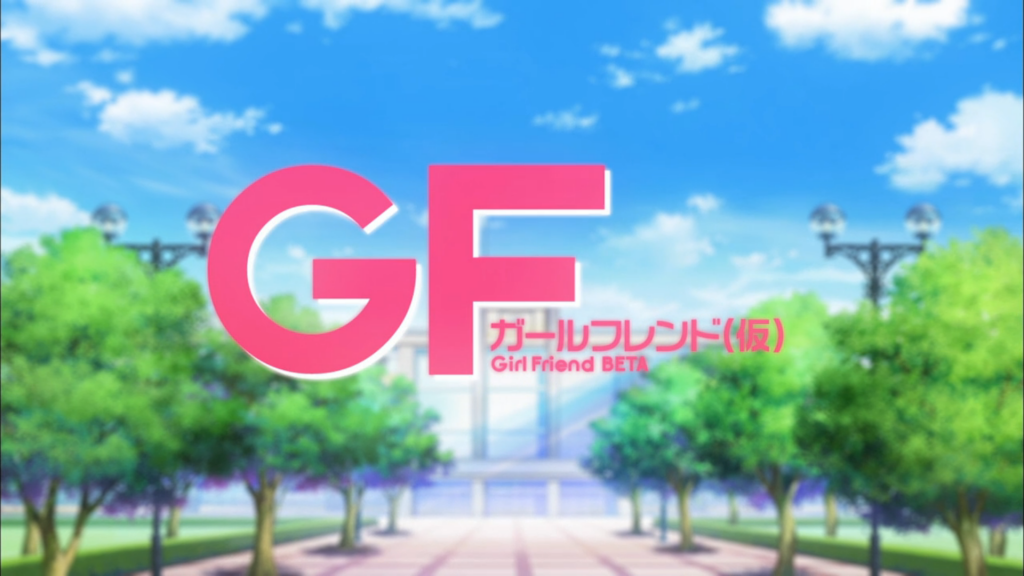 Ok, I’ll admit it; I decided to watch this anime based on the voice actors were in it. Or in this case, actresses. While it doesn’t contain huge names in voice acting, there are quite a few established voice actresses that are going to appear in this anime. Honestly, there’s too many to name; I’ll just leave this list here for you to browse through. Girl Friend BETA is an anime that is based on a game where you can have multiple girlfriends and date them. However, since that premise is way too open-ended with the sheer number of girls, they decided to go with just having those same girls live out their regular school lives with each other.

Admittedly, I probably should have guessed from the get-go that this probably wasn’t going to be the best anime. With the huge number of characters, there isn’t time to make any of them all that interesting and it’s hard to keep track of who is who. In addition, it’s not that entertaining to watch. They don’t try to spice up the characters with humour or give them elaborate backstories. As of right now, you have to like the characters at face value, but that isn’t really happening for me right now. The character I like best right now is Chloe Lemaire, the French immigrant girl who speaks in an obvious foreign Japanese accent. Although that could be my bias for the voice actress Sakura Tange, who I’ve been dying to hear voice a main character in an anime again since Cardcaptor Sakura. With a great voice acting cast, you don’t really have to worry about voice acting. That’s definitely covered. I like the general art, but I’m not a big fan of the girls’ designs. It seems intentional (it could be), but the girls’ breasts are so obvious that it kind of makes me uncomfortable at times.

That’s about it for this season for me. There are four other anime that I am thinking about starting: Inou-Battle wa Nichijou-kei no Naka de, Shigatsu wa Kimi no Uso, Sanzoku no Musume Ronja, and Yuuki Yuuna wa Yuusha de Aru. If any of you guys are watching these anime, could you recommend them to me knowing the kind of anime I like? Also, what do you guys think of the anime I’m currently watching if you are watching them as well? Let me know in the comments!