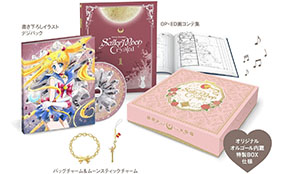 Amazon have listed the blu-ray limited deluxe edition of the first volume for the Bishoujo Senshi Sailor Moon: Crystal anime series which has revealed the first blu-ray volume cover along with the goodies that come with it. The release date for the first volume is expected to be released on October 15.

The Blu-ray/DVD release of the first volume will cover episode the first two episodes of the series. The bonuses which come with this volume are as follows: A music box which plays the opening theme “MOON PRIDE” by Momoiro Clover Z, a special illustration, some booklets and two Sailor Moon Crystal charms, commentary audio (planned), creditless opening and ending themes.