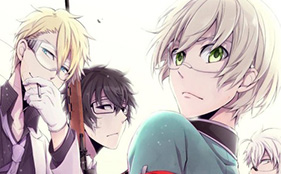 Step aside Free!, we have our next source of lady-boner educing goodness. With a cast of good looking males at the forefront, Aoharu x Kikanjuu‘s OP feature punk rock track “The Bravest Destiny” by Toy☆GunGun – an upbeat, catchy tune that goes well with the action packed animation sequence. Being about a survival game (basically paintball/BB gun club), the animation heavily features guns and gunplay, not to mention the aforementioned good looking males themselves.

Yet another sunny, bright rock track is the one featured in the ED: “Gunjou Survival” by Mikako Komatsu. Her vocals do a good job of rounding off an episode while the animation sequence is less serious than that of the OP, simply featuring vibrant visuals of the cast and scenery. A nice ending with a catchy track never fails to please! Check it out below: Aoharu x Kikanjuu is a survival game, crossdressing manga written and illustrated by NAOE. The series began as a short manga before being published as a full series in 2013 in Square Enix’s GFantasy magazine. To date a total of 6 volumes have been compiled and published, with the latest releasing on February 27th that announced the anime adaptation.

When Hotaru moves into a new apartment alone, there’s a mysterious man standing nearby the apartment. Hotaru decides to confront the man, who turns out to live in the neighboring apartment. The next day at school, Hotaru’s best friend Kanae tells Hotaru that a host tricked her out of her money. When Hotaru goes to confront the host, he happens to be none other than Hotaru’s neighbor, Masamune?!