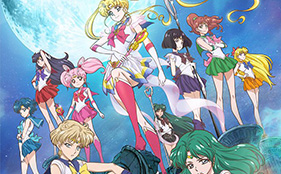 During a Niconico Live program which was held on Sailor Uranus’ birthday, January 27, for the recently announced third season of Bishoujo Senshi Sailor Moon Crystal, the staff announced the new voice cast members for the upcoming Death Busters-hen arc. The new season will assemble all 10 Senshi — specifically, the popular outer Senshi such as Sailor Uranus, Sailor Neptune, and Sailor Saturn who will join Sailor Moon, Sailor Chibi Moon, and the others to defend Earth from the negaverse. The new season will adapt the arc from the fifth and sixth volumes of Naoko Takeuchi’s original Sailor Moon manga.

The new cast consists of:

In addition to this, a new visual has been revealed which unveils the Outer Senshi characters for the first time.