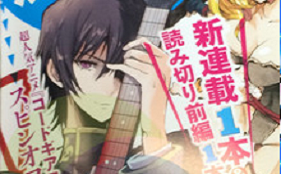 Just after one of Code Geass‘ spin-offs was released few months ago, which is Code Geass: Soubou no Oz 02, another spin-off was announced. According to the second issue of Kodansha’s Young Magazine the Third magazine, the spin-off manga, Code Black: Soku Hiki no Lelouch (lit. Code Black: Fast-Plucking Lelouch), will begin on November 6 on their next issue. The artist for the said manga will be Tomajirou Hoshi.

Synopsis of Code Black: Soku Hiki no Lelouch from ANN:

Lelouch, who although has “zero” knowledge of music, he is forced to become the vocalist and guitarist for a band at the school culture festival. Beyond this, a cruel destiny awaits. 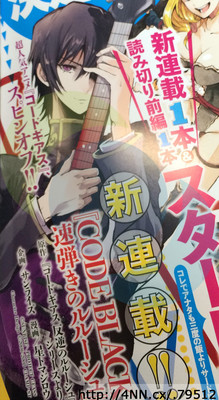 Code Geass is a popular original anime produced by Sunrise and was directed by Taniguchi Goro (Mugen no Ryvius, and an upcoming Winter anime, Junketsu no Maria). The series has received many side stories, spin-offs, movies and manga adaptations.

Synopsis of Code Geass from Haruhichan:

On August 10th of the year 2010 the Holy Empire of Britannia began a campaign of conquest, its sights set on Japan. Operations were completed in one month thanks to Britannia’s deployment of new mobile humanoid armor vehicles dubbed Knightmare Frames. Japan’s rights and identity were stripped away, the once proud nation now referred to as Area 11. Its citizens, Elevens, are forced to scratch out a living while the Britannian aristocracy lives comfortably within their settlements. Pockets of resistance appear throughout Area 11, working towards independence for Japan.

Lelouch, an exiled Imperial Prince of Britannia posing as a student, finds himself in the heart of the ongoing conflict for the island nation. Through a chance meeting with a mysterious girl named C.C., Lelouch gains his Geass, the power of the king. Now endowed with absolute dominance over any person, Lelouch may finally realize his goal of bringing down Britannia from within!

Are you ready to see a vocalist Lelouch on-stage? He might have been dragged by Milly Ashford once again (as we can see a peek of her in the magazine). What do you think about this spin-off?