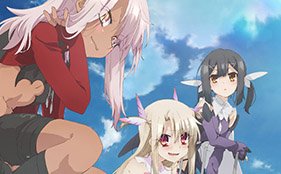 Will you be watching Fate/kaleid liner Prisma Illya 2wei! this summer?