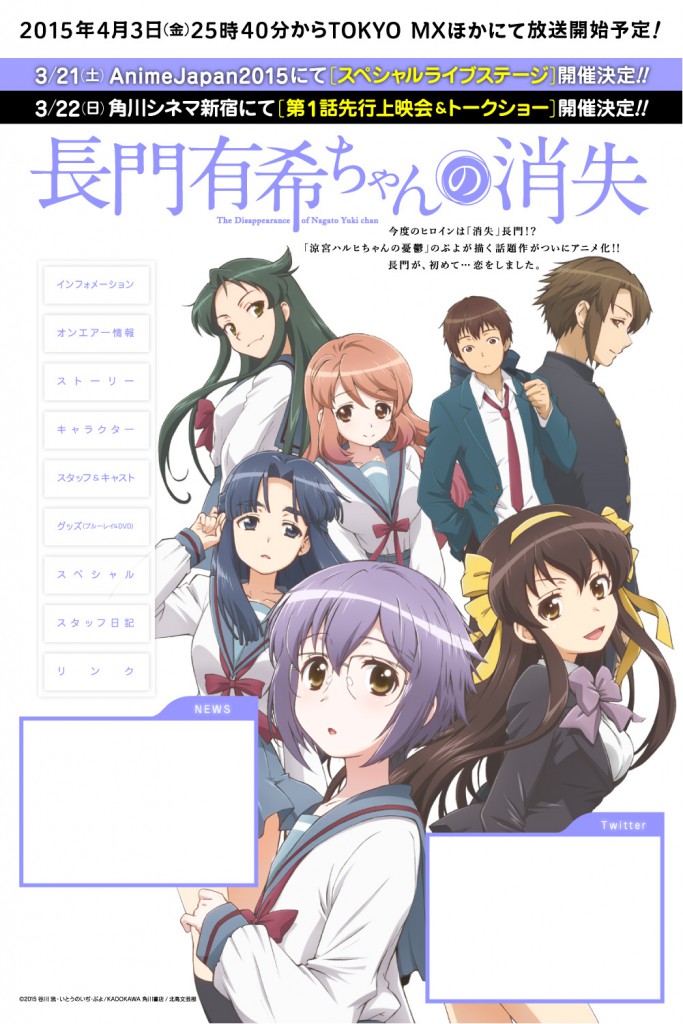 The Melancholy of Haruhi Suzumiya series is widely regarded as being one of anime’s best, or at least the first season is. The first season is anime in a nutshell. It has a sports episode, a music episode, a mecha episode, and of course, you have its supernatural, slice of life comedy episodes that define the series. God is here, and she’s bored! If you haven’t watched this series yet, stop reading this, and go watch it right now.

In 2009, a spin-off manga was created. This manga focuses on an alternate universe where Haruhi, and the rest of the cast have no super powers and it’s just them living their regular school lives. Nagato Yuki, who previously had no emotion due to her being an alien programmed to show no emotion is now a regular human who still keeps her archetype of being a quiet bookworm. However, now she has a crush on Kyon, since he joined the Literature Club. If you watched the movie, The Disappearance of Haruhi Suzumiya (watch it, it’s absolutely amazing), it takes place in that world. After waiting 4 years for more of the Haruhi Suzumiya series after the movie, I was excited to see this anime, even if it was a spin-off.

The anime starts right where the movie starts, the week before Christmas. Except this is an alternate dimension than the movie, which takes place in the same world… Anyway, back to the anime. The story of the anime is simple: the main cast is living their own school lives in the same school that the main series takes place in. The only exception to this is that there is no Haruhi (at least not right away). The focus is more on the characters, and it should be as this is a romance anime. The main goal of this series is for Nagato to confess to Kyon, and she is helped along by Asakura Ryouko. Remember her from the main series? Yep, she’s back.

While it is nice to see the series back, it is a little bit boring to watch at times. I absolutely loved the movie, so I thought the premise of the anime would work out well enough. My love for Nagato as a character makes the anime a little more bearable for me, but this is also a different Nagato than both the main series and the movie. This Nagato doesn’t quite have the appeal the other two did. She feels kind of boring. This Nagato still has her moments though. The one thing that remains unchanged though, is Haruhi Suzumiya. When she makes her return a couple of episodes in, it felt like I had gone back in time, to the point where I was watching the series for the first time. I felt that giddy excitement return, and I couldn’t help but smile whenever Haruhi did something crazy. “Haruhi is Haruhi”, Kyon has said before, and it seems she will never change.

I was disappointed when I heard that Kyoto Animation would not be doing this anime. They did such a great job with the rest of the series, so I couldn’t imagine another studio doing it. I still hold this view as I watch this. It’s not that Satelight’s work here is bad, it’s just that Kyoto Animation did such an amazing job, so it’s hard to watch this and compare them. If I didn’t watch the movie, I would probably be more okay with this art style. Regardless, the anime still captures the general art style of the series.

All of the voice actors from the original Haruhi Suzumiya series returns in this anime to reprise their roles. As such, each character sounds exactly as they you remember from the old days if you watched the original series. The only voice actress that sounds different is Minori Chihara who voices Yuki Nagato. Even though it should be obvious that she would sound different now that Yuki has emotions, she sounds different than even the movie version of Yuki Nagato. I don’t mind Yuki’s voice in this anime, but I’m so used to regular emotionless Yuki, that it threw me off when I first started this anime. The songs for the anime don’t really excite me that much, but just like some of the other songs in the series, the opening is sung by the females of the series, and the ending is done by Minori Chihara. It’s nostalgic hearing some of the voice cast sing more songs together. It’s been a long time.

This anime is really meant for those fans looking to see more of the random shenanigans the series is known for, or those who want to see more of the romance side of things the regular series hinted at. This anime isn’t for newcomers to the series. There are too many references and hints to the main series for anyone looking to just watch this casually. I would highly recommend that you watch the main series before you watch this. In addition, you might as well watch the main series if you haven’t, since Haruhi is the mascot for this site.

What do you guys think of this spin-off of the Haruhi Suzumiya series? Let me know in the comments!