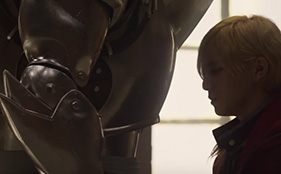 The official website for the upcoming live-action film of Hiromu Arakawa’s Fullmetal Alchemist manga began streaming a teaser video for the film on Wednesday. The video previews Ryosuke Yamada in costume as the alchemist Edward Elric, as well as his little brother Al in full CG. The movie will be directed by Fumihiko Sori, who is best known for the 2002 film Ping Pong.

The website had launched a countdown last Friday. The film will open in Japan in winter 2017.

Edward Elric, a young, brilliant alchemist, has lost much in his twelve-year life: when he and his brother Alphonse try to resurrect their dead mother through the forbidden act of human transmutation, Edward loses his brother as well as two of his limbs. With his supreme alchemy skills, Edward binds Alphonse’s soul to a large suit of armor.

A year later, Edward, now promoted to the fullmetal alchemist of the state, embarks on a journey with his younger brother to obtain the Philosopher’s Stone. The fabled mythical object is rumored to be capable of amplifying an alchemist’s abilities by leaps and bounds, thus allowing them to override the fundamental law of alchemy: to gain something, an alchemist must sacrifice something of equal value. Edward hopes to draw into the military’s resources to find the fabled stone and restore his and Alphonse’s bodies to normal. However, the Elric brothers soon discover that there is more to the legendary stone than meets the eye, as they are led to the epicenter of a far darker battle than they could have ever imagined.

Fullmetal Alchemist is a Japanese manga series written and illustrated by Hiromu Arakawa. It was serialized in Square Enix’s Monthly Shōnen Gangan magazine between August 2001 and June 2010; the publisher later collected the individual chapters into twenty-seven tankōbon volumes. The world of Fullmetal Alchemist is styled after the European Industrial Revolution. Set in a fictional universe in which alchemy is one of the most advanced scientific techniques, the story follows two alchemist brothers named Edward and Alphonse Elric, who are searching for the philosopher’s stone to restore their bodies after a failed attempt to bring their mother back to life using alchemy.

The manga was published and localized in English by Viz Media in North America, Madman Entertainment in Australasia, and Chuang Yi in Singapore. It has been adapted into two anime television series, two animated films—all animated by Bones studio—and light novels. Funimation dubbed the television series, films and video games. The series has generated original video animations, video games, supplementary books, collectible card game and a variety of action figures and other merchandise. A live action film based on the series is also in development.

The Fullmetal Alchemist manga has sold approximately 64 million volumes worldwide. The English release of the manga’s first volume was the top-selling graphic novel during 2005. In two TV Asahi web polls, the anime was voted the most popular anime of all time in Japan. At the American Anime Awards in February 2007, it was eligible for eight awards, nominated for six, and won five. Reviewers from several media conglomerations had positive comments on the series, particularly for its character development, action scenes, symbolism, and philosophical references.