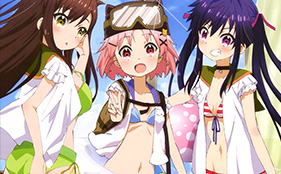 The July 18 report by Hon no Hikidashi, the official news site owned by Nippan/Nippon Shuppan Hanbai, one of the biggest book distributors in Japan, has revealed that the sales of the based on Norimitsu Kaihou and Sadoru Chiba’s Gakkou Gurashi! manga’s first volume in the week of July 6-12 increased about 10 times more than the previous week of June 29 to July 5. The anime’s first episode has already been viewed over 1.5 million times on Nico Nico Douga.