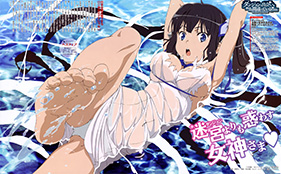 A new visual for Fujino Omori’s Danmachi has been revealed in the July issue of Dengeki G’s magazine. The new visual features the Goddess Hestia splashing about in shallow water. Danmachi was also featured as an article in the June issue of Animedia. The new visual features the Goddess Hestia and the strongest adventurer in history, Ais Wallenstein. Two new key visuals were recently revealed in the June issue of Megami and NyanType. The first visual is from June’sMegami issue and features Hestia leaning over a bar while drinking a glass of red wine. While the second visual from June’s NyanType issue displays her getting undressed.