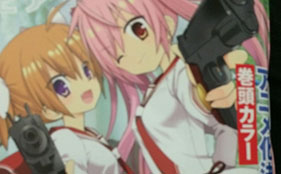 Media factory began streaming a promotional video on Wednesday for the upcoming anime adaptation of Chuugaku Akamatsu’s and Shogako Tachibana’s spin-off manga series, Hidan no Aria AA. Hidan no Aria AA is a spin-off of the Hidan no Aria light novel series.

A teaser was also released back in July which was hinting at the project:

Visual of the announcement: