The official website of the upcoming anime film adaptation of Kouji Ohji and Futoshi Nishiya’s High☆Speed! light novel series, the basis of Animation Do’s Free! anime, has revealed a new trailer. The film takes place during the time the bishounen swimming boys are in their blossoming youth, in middle school. The story will serve us Free! – Iwatobi Swim Club fangirls with the swim group’s origins and tribulations, a prequel.

A new visual for the film’s movie poster was also released. High☆Speed! – Free! Starting Days – is directed by Yasuhiro Takemoto and will feature animation from the appraised Kyoto Animation studio and Animation Do. The prequel film is set to release in Japanese theatres on December 5th, 2015. 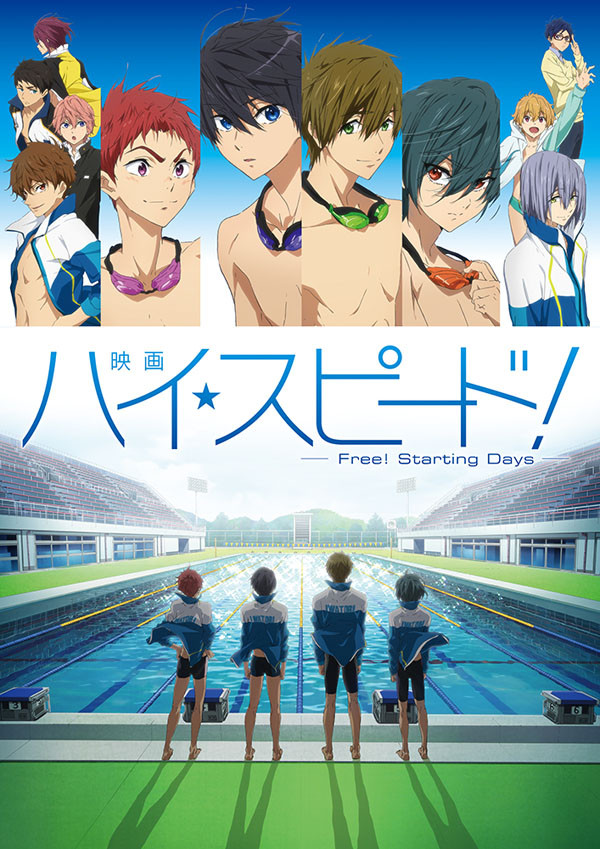 The above video reintroduces one of the cast members in the upcoming film. In conjunction, to date, two members of the main cast have been revealed:

Additional members of the movie’s production staff were also revealed, where Kyoto Animation will be animating the film instead of Animation Do:

Here’s a teaser trailer for the film:

Free! (Free! – Iwatobi Swim Club) is a TV anime series based of Kouji Ohji light novel High☆Speed!, which is illustrated by Futoshi Nishiya. The light novel received an honourable mention in the 2011 Kyoto Animation Award contest, and to date a total of 2 volumes have been published by Kyoto Animation. The anime adaptation aired from July 2013 for 12 episodes, animated by Kyoto Animation (Hyouka, Clannad) and Animation Do – with the latter’s animation debut. The second season of the anime, Free! – Eternal Summer, aired in Summer 2014. There were also radio shows and drama CD volumes released to promote the two anime seasons.

The story revolves around Haruka Nanase, a boy who has always loved to be immersed in water, and to swim in it. Before graduating from elementary school, he participated in a swimming tournament along with his fellow swimming club members, Makoto Tachibana, Nagisa Hazuki, and Rin Matsuoka. After achieving victory, each of the boys went their separate ways.

Time passed, and in the middle of their uneventful high school lives Rin appears and challenges Haruka to a match, showing Haruka his overwhelming power. Not wanting it to end like this, Haruka, gathers together Makoto and Nagisa once again and brings a new member named Rei Ryugazaki to create the Iwatobi High School Swimming Club in order to defeat Rin.

The Free! anime prequel film High☆Speed! -Free! Starting Days- will be released in Japanese theatres from December 5th. Further information will be revealed at a later date.