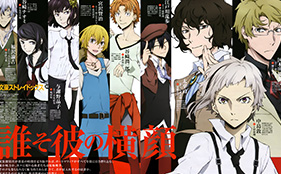 New information regarding the upcoming anime adaptation of Kafka Asagiri (Shionomiya Ayane wa Machigaenai.) and Hirukawa35’s supernatural manga, Bungou Stray Dogs, has been revealed. Although the exact scheduling dates and times have not been revealed yet, it has been announced that the Bungo Stray Dogs TV anime will broadcast on Tokyo MX, Teletama, Chiba TV, tvk, Gifu Broadcasting (GBS), Mie TV Broadcasting, Sun TV, TVQ Kyushu Broadcasting, and BS11.

It was also revealed that the ending theme for the series will be titled”Namae wo Yobu yo” and performed by Luck Life.

In addition to this, a new visual has been revealed in the February 2016 issue of NewType. You can purchase this issue here (get 5% off with coupon code MOE-N3Y-4YW0QK).