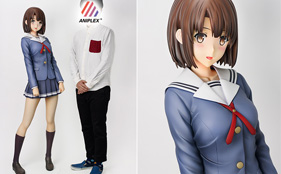 Aniplex have revealed that due to popular demand, the production run for the life-sized figure of Megumi Katou has been doubled from a total of 10 figures to a total of 20. The figure costs 1,980,000 (about $16738.46 USD) yen and as only 20 of them will be made, a lottery will be held, and the chosen twenty participants will get the right to purchase these statues. The drawing will happen after 6:00PM JST on February 29, 2016, with the final products shipping in June of 2016.

Here’s some pictures of the figure which we reported on previously.

In addition to this, Japanese Twitter user IoryHamon has given us a chance to see the life-sized statue of Saekano‘s Megumi Katou displayed in Saekano Shop 2016 Exhibition at Tokyo Anime Center.