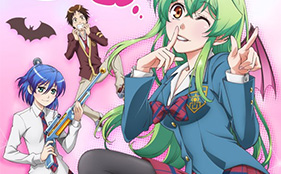 The official website of the anime adaptation of Eiji Masuda’s Jitsu wa Watashi wa (The Truth Is I Am…) manga has revealed a new promotional video which introduces the main characters and premise of the series, and also previews the Opening theme song “Himitsu o Choudai” sung by Ars Magna.

The Jitsu wa Watashi wa anime will debut from Tuesday July 7th on TV Tokyo and TV Osaka at 1:35am JST. The anime will then air on TV Aichi on the 10th at 2:05am JST and on TV Setouchi at 2:15am JST on the same day.

The anime’s website also revealed the first set of character designs for the main cast of the anime. They include:

There will be a pre-screening event for the anime’s first episode on Saturday, June 20 at the Coconeri Conference Hall at Nerima Industrial Plaza. The event will see a special screening of the anime’s first episode before its official debut and will also have a talk session with the anime’s main cast. Voice actors and actresses Yuu Serizawa, Natsuki Hanae, Inori Minase, Reina Ueda, Aya Uchida and Mao Ichimichi, will be attending the event. It will open at 12:30pm JST with the event starting at 1:00pm JST and ending at 2:30pm JST. Tickets for the event will go on sale from May 11th at 10:00am JST.

The Jitsu wa Watashi wa anime will be airing from July 7th at 1:35am JST on TV Tokyo in the Summer 2015 Summer season. Additional information about the anime will be revealed in the near future.