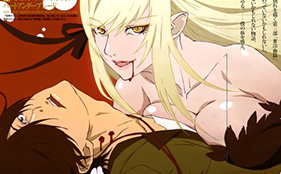 Aniplex of America revealed plans to release the film Kizumonogatari I Tekketsu-hen in theaters in the United States on February 26, 2016, on Thursday. The company began streaming a second English-subtitled trailer for the film.

The Tokyo Cinema City theatre listed the first film of the upcoming anime adaptation of Nisio Isin and Vofan’s Kizumonogatari entry in the Monogatari light novel series to run for a total of 60 minutes.