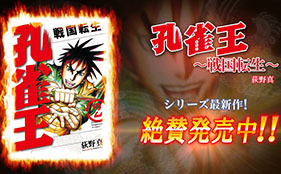 With the release of the 2nd volume of OGINO Makoto’s Kujakuou – Sengoku Tensei manga series, an animated promotional video for the series has been revealed.

Kujakuou – Sengoku Tensei is a Seinen / Super Natural manga series by OGINO Makoto. It is currently ongoing and has 2 volumes released with the 2nd recently released on the 27th of October. It is serialized in the Sengoku Bushou Retsuden magazine.