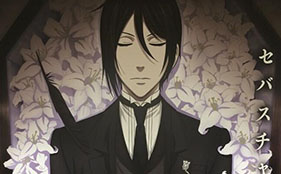 The first commercial for the two-part OVA Kuroshitsuji: Book of Murder has been streamed. Episodes 1 and 2 will be previewed at multiple theaters in different cities across Japan on October 25 and November 15, 2014. The DVD / BD home release will be released in January 28 and February 25, 2015.

Kuroshitsuji is 24-episode anime adaption, directed by Toshiya Shinohara and produced by A-1 Pictures, aired from October 2008 to March 2009. The second season, Kuroshitsuji II, aired in 2010 spanning 18 episodes with two new main characters, Alois Trancy and Claude Faustus. A live action film adaptation was released in Japan on January 18, 2014. A third anime series, titled Kuroshitsuji: Book of Circus, was broadcast between July 10 and September 12, 2014. A new OVA titled Kuroshitsuji: Book of Murder will be screened in theaters in fall 2014.

The OVA is subtitled Book of Murder and will pre-screen in theaters Fall 2014. It will adapt the Phantomhive Manor Murder Case Arc, which follows the circus arc in the manga.