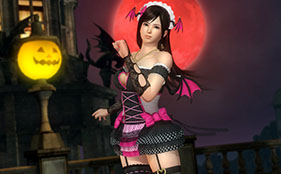 Koei Tecmo and Team Ninja sure do love to dress their boys and gals up for Halloween. Take a look at this video that features all of the custom fan-made costumes that they’ve included into the DLC (downloadable content).

There’s an incredible amount of variety in the costume designs. From Zack’s incredibly flamboyant pumpkin get-up to Kasumi’s super spooky reaper costume. All the characters are equipped with a new stylish ‘skin’ that’ll definitely perk up the game and give it a fresh look.

A personal favorite of mine is Mila – she’s looking mighty irresistible in what I assumed to be a skimpy mummy costume.

Fear not for fans who were planning on waiting for the first PS4 DoA title, Dead or Alive 5: Final Round, it has already been confirmed that all DLC purchased from Dead or Alive 5 Ultimate will be transferable, so don’t be hesitant about purchasing the DLC.

I’m a human being with some casual interests like: music, animations, and games.