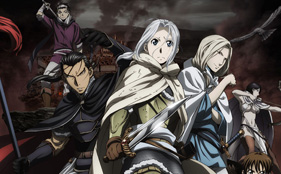 On March 15th, 2015, the official website for the upcoming TV anime adaptation of Tanaka Yoshiki’s fantasy novel series Arslan Senki began streaming a new commercial that revealed the opening song of the series, “Boku no Kotoba Dewanai Kore wa Bokutachi no Kotoba” which roughly translates to “These Words Aren’t Mine, They’re Ours.” The song is performed by UVERworld, a band that has previously recorded themes songs for Ao no Exorcist and Bleach. The ending theme song of the anime was also revealed. Named Lapis Lazuili, it will be performed by Japanese female singer Eir Aoi (Kill la Kill’s “Sirius”). The song will be composed by Yusuke Kato. The Arslan Senki TV anime will premier on April 5th on MBS and air during the Spring 2015 anime season. Further information about the anime will be revealed in the near future.