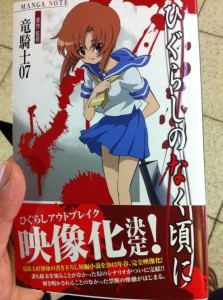 The official twitter of the Higurashi no Naku Koro ni anime has just tweeted that a new anime project is currently under way, but being called a ‘relaunch’. On top of that, at the recent 10th Anniversary event for the series, the anime will air in spring 2013. There has been no mention of what the new project will air as- either a new series, OVA or film have not been confirmed.

The new relaunch, called Higurashi no Naku Koro ni will adapt the story of a short story called “Higurashi Outbreak” which was included in the original soundtrack for the game. The short story itself was conceived by creator Ryukishi07. The new anime project will be directed by Toshifumi Kawase who directed Higurashi no Naku Koro ni Rei. The short story revolves around the village of Hinamaizawa, like in previous entires, which has been sealed off. Keiichi Maebara and Rena Ryūgū must deal with the new outbreak.

Higurashi no Naku Koro ni first released as a visual/audio novel in 2002 by 07th Expansion. The novel revolved around the mysteries and puzzles about the murders that occur at the same time of a annual festival in a rural village. There has been many entires in the game’s series which are primarily separated into Question and Answer Arcs. Questions Arcs would deliver a mysterious scene and Answer Arcs requires you to solve the mystery.

The novel series has had two anime adaptations: Higurashi no Naku Koro ni and Higurashi no Naku Koro ni Kai, as well as many OVAs and two films. The franchise is acclaimed for its use of sound in the visual novels, and how it was able to create an interesting and unique gameplay mechanic. The anime series also has a large following with many citing the character development and suspenseful plot being its major strengths,

If you do intend to watch the anime, please note that it is quite mature and features heavy violence and gore.