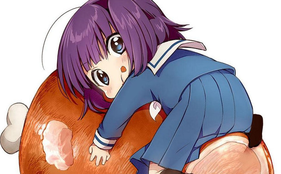 The official Twitter account for Manga Time Kirara, a manga magazine, has shared a new “stomach growling” visual for the cute slice of life cooking series Koufuku Graffiti. The visual features Morino Kirin, the cousin of the main character, clinging on to a delicious looking ham!

The story of this comedy four-panel manga follows a girl named Ryou who lives by herself. She enjoys cooking and makes friendships through her food. The manga is filled with detailed cuisine art meant to arouse one’s appetite and slightly suggestive meal scenes. The manga is written by Kawai Makoto and has been running since March 2012 in Manga Time Kirara. Manga Time Kirara has also serialized Gochuumon wa Usagi Desu ka? and Kiniro Mosaic.

And here is the first promotional video for the anime: