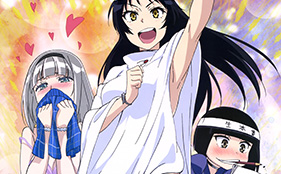 Anna Nishikinomiya, Ayame Kajou, and Otome Saotome from the anime adaptation of Hirotaka Akagi’s Shimoneta to Iu Gainen ga Sonzai Shinai Taikutsu na Sekai (Shimoseka) light novel series have been featured as a poster in the October 2015 issue of NyanType. You can purchase this issue of NyanType magazine issue here and you can view the other posters in this issue here.

Meanwhile, ATX had the uncensored version at the end of the episode: