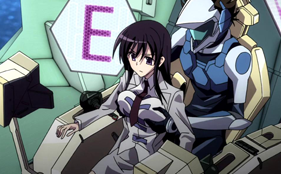 The official English dub cast for the anime Kenzen Robo Daimidaler has been released on Tuesday by FUNimation entertainment, the anime Blu-ray/DVD edition will come out on December 15th, here’s a video preview for the dub below.

The main cast include:

Synopsis of Daimidaler by FUNimation:

The creators of High School DxD bring you a ridiculously raunchy romp through a world filled with mechs powered by perversion! The earth is under attack by the alien Penguin Empire and only heroes able to produce Hi-Ero particles need apply. Piloting the Daimidaler mechs are master pervert Kouichi with his take-no-prisoners libido and Kiriko, a girl who can level cities just by thinking of her boyfriend. It’s up to them to dodge the massive front tails of the filthy penguin commandos and go toe to toe with rival mechs powered by a girl who loves penguins a little too much. Experience an overflow of Hi-Ero power with brave Daimidaler!