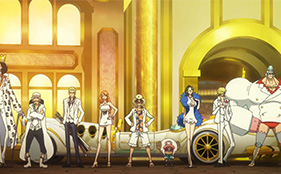 The official website of the upcoming 13th One Piece film, One Piece Film Gold, began streaming on Monday. In addition to this, Japanese entertainment company T-Joy announced that it will screen the One Piece Film Gold anime with English and Chinese subtitles in five Japanese cities from July 23 to August 5. The film will screen in Tokyo’s Shinjuku Wald 9 and T-Joy Prince Shinagawa, Kanagawa’s Yokohama Burg 13, Kyoto’s T-Joy Kyoto, Osaka’s Umeda Burg 7, and Fukuoka’s T-Joy Hakata theaters.

Set in Grantesoro, an independent country chartered by the World Government, home of the world’s greatest entertainment city where well-known pirates, [Marines], and millionaires throughout the world gather in an “absolute sanctuary” that even the World Government can’t touch.
There, Luffy and the others meet the ruler of the country, the golden emperor Guild Tesoro who easily wins pirates, the [Marines], and even the World Government over to his side with money. He is about to take action to satisfy his bottomless ambition which may result in major changes in power relationships in the New World…

In addition to this, the character costume designs were recently revealed on the official website: