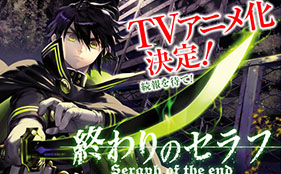 Announced today on the official site and the editorial department of Shueisha’s Jump Square mangazine twitter , a TV Anime adaptation of novelist Takaya Kagami (The Legend of the Legendary Heroes, A Dark Rabbit Has Seven Lives), manga creator Daisuke Furuya, and manga artist Yamato Yamamoto (Kure-nai)’s Owari no Seraph (Seraph of the End) manga has been green-lit. The staff noted that the animation studio, the cast, and other details will be announced at a later time.

Owari no Seraph (Seraph of the End) synopsis from Haruhichan: