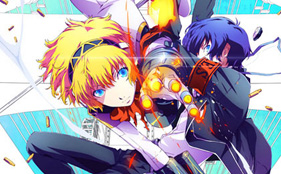 Aniplex USA have streamed a new trailer announcing that there will be a Blu-ray release for Persona 3 the Movie #2: Midsummer Knight’s Dream, the second animated film based on Atlus’ hit 2006/2007 RPG Persona 3. The movie itself will continue on from the first film as the SEES investigate further into Tartarus, and is produced by AIC (Sora no Otoshimono, Jinrui wa Suitai Shimashita) and directed by Tomohisa Taguchi (Persona 4 the Golden Animation). The Blu-ray release will have a standard edition and a collector’s edition. Both will have the full movie, released trailers, commercials and audio commentary, and the collectors edition will also contain: the film’s OST, an exclusive box art designed by character designer Keisuke Watabe, a new cover art, a 48 page booklet, 10 stickers and 3 illustration cards.

The Persona 3 the Movie #2: Midsummer Knight’s Dream Blu-ray will release in North America on March 11th by Aniplex USA. The standard will cost $59.98 USD and the collector’s costing $79.98 USD. You can purchase the film here: http://www.aniplexusa.com/p3m/

Here is the film’s main Visual: