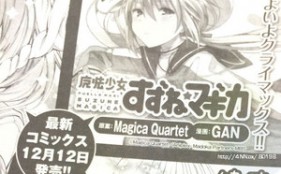 It was announced in the December issue of Houbunsha’s Manga Time Kirara Forward magazine that the manga spin-off series of Mahou Shoujo Madoka Magica, titled Puella Magi Suzune Magica, will end in the following issue on November 22. The third compiled volume of this spin-off series will be published by Houbunsha on December 12. 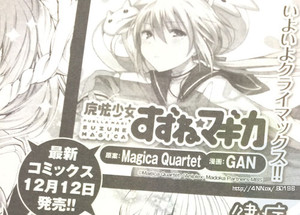 Puella Magi Suzune Magica was illustrated by GAN (Kakute Horobita Dystopia). The first four chapters of the series was released on November 12, 2013 in one compiled volume. The fifth chapter began serialization in Manga Time Kirara Forward magazine on November 22, 2013. Chapters 5-10 were compiled as a second volume and was released on June 25, 2014.

You can read the official Japanese preview of Puella Magi Suzune Magica that includes the manga’s first 12 pages here: http://www.dokidokivisual.com/comics/book/actibook/wb43705/_SWF_Window.html

A middle-schooler who gallantly sleeps in, Suzune. Though she always goes about with a bright smile, there’s another side to her. That is, she’s a magical girl assassin. What will be the fate of the four magical girls she ambushes…?! The first chapter of the spinoff that asks about the existence of “magical girls,” and the goodness and evil residing within oneself!