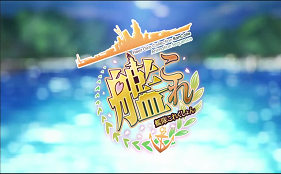 It’s interesting how much one person can get a completely different perspective in a few months. When I first talked about Kantai Collection (hereby referred to as KanColle) at the beginning of the season, I knew next to nothing about it. All I knew about it was that it was an online free-to-play browser game that had Japan in its thralls. The anime was getting a lot of hype, but I didn’t know why. I actually picked up the anime on a whim, to see what all the fuss was about. After I did my second First Impressions of the anime, I picked up the game myself. Now armed with the knowledge of a player of the game, I can bring you this review without feeling like I am being ignorant of the source material. So, how does KanColle turn out in the eyes of a player of the game, and as an anime fan? Let’s find out!

Being an online free-to-play browser game, it is hard to really piece together a good story. Even in the game itself, there is not much to go on. The premise of the game/anime is that aliens called the Abyssals, have taken over the seas. The only people that can fight them are girls born with the power of ships of old. These girls are all based off of Japanese ships used during World War II, from small destroyers, to huge battleships, to powerful carriers. To take them on, the girls equip weapons based on their particular ship class. Destroyers carry small cannons alongside torpedo launchers, battleships carry huge guns, and carriers carry bows to simulate their ability to launch planes from afar. The game brings you through multiple levels all with the purpose of clearing them to move on to the next world. It’s not exactly easy to draw a story out of this premise. As such, the story of the anime is an original one.

The story of the anime follows Fubuki (the “default” starter ship) as she trains to become a better combat ship. Inspired by the fleet’s prized carrier, Akagi, Fubuki hopes to one day become worthy of being in the same fleet as Akagi. With the game not being able to provide much from a story standpoint, the creators of the anime are sort of forced to draw from references that are made in the game. Although combat is central to the game, so is the downtime in between battles. Being a free-to-play game, it relies on time to bore the player and, hopefully, extract money out of them so that players spend less time waiting around. As such, much of the anime simply has the girls doing random things in their base to help fill in the time. This turns the anime into a slice of life which may, or may not, be your cup of tea.

In between the slice of life portions, the anime creators decided on a World War II timeline for the story. The story is based off of Operations FS, an operation laid out by the Imperial Japanese Navy to invade the South Pacific. The timeline historically goes from December 1941, with the outbreak of the war between Japan and the United States, to the Battle of Midway in June 1942. The major battles include Wake Island, Coral Sea, and Midway. In terms of historical accuracy, the anime does a decent job reenacting these battles, albeit in its own anime way. The main issue with the story here is the tone of it. It goes from being happy-go-lucky for a couple of episodes, to a serious one, to a couple more regular slice of life episodes to a serious one, etc. These jumps back and forth really jar the mood of the anime, and it adds in unnecessary tension where there shouldn’t be any. Episode 3 is the episode where they established this feeling of dread that would follow in any episode where there was a battle. In this way, it annoys the players and/or slice of life fans, since they wanted nothing more than to watch these characters go through these battles without risk of death, and it annoys action fans since there wasn’t enough action and/or character deaths. The way in-game mechanics works differently than in other games, so the scenario that happened in episode 3 makes sense from a realistic standpoint, but not from a game standpoint. In short, while the anime’s story attempts to be historically accurate and tense enough for action anime fans, it ends up pleasing neither fans of the game or action anime fans because of the way the story is told.

Speaking of the characters, they’re the reason why KanColle players were excited to watch the anime. Without a main story to follow, the characters take the spotlight in the KanColle game. There is an absurd number of ships in the game, so there was no way half of them were even going to get in the anime. Even so, 12 episodes is not enough time to fully develop every character that did appear in the anime. In the end, the only characters to really develop were Fubuki and Yuudachi. That being said, the half-English, half-Japanese Kongou also ended up becoming a fan favourite. She was already a heavy favourite from the game due to her obvious love for the admiral (the player/you). In the anime though, she was also loved for her caring and supportive personality, and probably her quirk of using random English.

The anime tried its best to include as many characters as possible, but most of them ended up regulated as background characters without a single spoken line.  If they weren’t background characters, they were mentioned by name. Either way, there was only about 20 characters that ended up with some screen time outside of the main cast. If some of the characters did make it into the anime, the majority of their lines were lines from the game which may or may not have made fans happy depending on whether or not they wanted to hear something different from these characters. For example, Kirishima checks her microphone if you happen to get her in the game. In the anime, she had not one, but two of this exact same line from the game.

In short, the story did its best with what was presented but it falls flat, and the characters were done decently. Hopefully, the newly announced second season will improve upon the story and characters. The story ends well enough for a standalone anime, but there is a set-up for the second season.

This is where I personally have mixed opinions on KanColle. The anime as a whole has a nice, bright feel to it with it getting darker once fight scenes hit. In that way, the art is fine. The problem comes in during some of the action scenes. The action scenes make use of 3D CG which is still in its infancy in Japanese animation. When an anime does this split between 2D and 3D, it is noticeable and I can’t help but feel like there’s always inconsistencies when they do it. I understand the reasoning for doing action scenes in 3D because it’s much smoother than 2D, but it clashes with the rest of the 2D scenes.

As for the characters themselves, the artists for the anime did a good job with taking these characters from the game into the anime. The game uses multiple different artists for their characters, but the anime uses one type of style for every character. Diomedea has always done right by me when it comes to creating cute girls and KanColle is no exception. Part of the appeal of the game is the character art, so it was important that the art was right. In my opinion, they nailed it.

While there are problems with the anime doing a 2D/3D split, the art comes through especially if you’re a moe fan.

If you ever wanted a good example of Japanese voice acting versatility, you should look no further than KanColle. There’s about 40 or so characters in the anime, but only 15 or so voice actresses. Many voice actresses voice multiple characters, particularly if they are the same class of ship/sister ships. The voice actresses with the most roles in the anime were Ayane Sakura (Sendai, Naka, Jintsuu, Shimakaze, Nagato, Mutsu, Kuma, and Tama), Nao Touyama (Kongou, Hiei, Haruna, Kirishima, Takao, and Atago), and Aya Suzaki (Akatsuki, Hibiki, Ikazuchi, Inazuma, and Houshou). The part I really like about the voice acting here is how different these characters are from each other, and the multiple different voices these voice actresses can pull off. If you were to put Nagato and Shimakaze side by side, you would never know they were done by the same person. In this way, every voice actress impressed me with their handling of multiple characters.

The soundtrack in the anime works well enough for their respective scenes. However, big props goes out to the OP, 海色 (“Miiro”) and ED, 吹雪 (“Fubuki”). Both songs fit the anime incredibly well, and in terms of composition, make the most sense to me. I don’t watch a ton of anime, but “Miiro” is one of the best anime songs I have heard in a couple of seasons. I like “Fubuki” a lot for its lyrics, which really fit the anime in reference to the game. In the full version of the song, they use the names of all of the Fubuki-class destroyers in the song itself, which I think is a great nod to the game and the ships themselves.

Japanese voice acting versatility and a killer OP and ED help KanColle do well in the sound department.

KanColle tried its best to appeal to both the game fans and action fans. While the story didn’t really end up pleasing either audience with its melodramatic tone, I still found it relatively enjoyable. It had the appropriate number of game references alongside its good portrayal of its characters. The struggles with 2D and 3D anination split continue, but the character art helps it along. The strength of Japanese voice actresses shines through more noticeably in this anime than any other, and the opening and ending songs were simply amazing. If you’re looking for a cutesy anime with some action, this is for you. If you’re looking for an anime with a lot of action or something relaxing to watch, it’s probably best to steer clear.

+ OP and ED are fantastic

+ Good number of references for fans of the game

So, any final thoughts on KanColle? Also, what do you think about the announcement of a second season? Let me know in the comments!