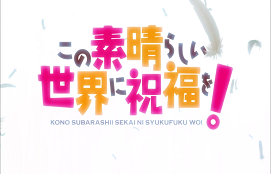 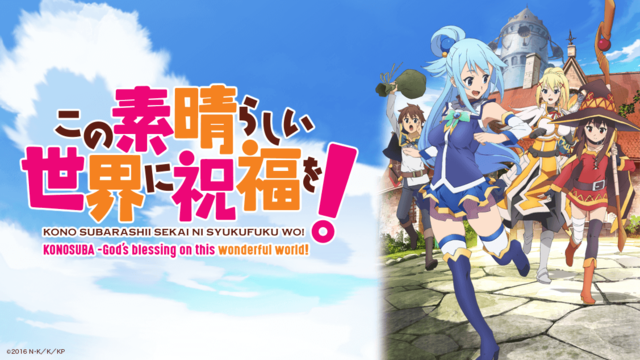 Over the last couple of years, there have been a seemingly endless string of anime that are based in a video game world, or worlds that resemble something out a video game. Accel World, Log Horizon, and of course, Sword Art Online are just a few. Kono Subarashii Sekai ni Shukufuku wo! (KonoSuba for short) is another anime set in a fantasy world resembling a game. However, while most of these anime take their video game worlds seriously, KonoSuba throws the serious tone out the window and opts to make fun of the whole concept.

Kazuma Satou is an otaku NEET who spends his time playing video games. On his way back home from buying a new video game, he sees a girl about to be hit by a vehicle and he pushes her out of the way. When he regains consciousness, a goddess named Aqua tells him that he died in the most ridiculous fashion, and that he now has a choice. He can either go to Heaven or Hell. Aqua informs him though, that Heaven is simply no fun, and Hell is well… Hell. So she presents him with a third option: she can reincarnate him in a game-like fantasy world where his objective would be to take down an evil Demon King. He jumps at the chance to do this, and she tells him that he can bring one person/item into the world with him. When he can’t decide and Aqua starts pressuring him, Kazuma chooses her, and another goddess grants his wish. Aqua now finds herself stuck in this new world with Kazuma, and he begins his adventure to stop the Demon King.

This sounds like a pretty standard set-up for an anime based in a video game world, and it is. However, KonoSuba turns the plot on its head and is just the set-up for an anime that pokes fun at a lot of cliches in these types of anime. KonoSuba is a comedy first and foremost. There is little plot development, and even when there is, the characters still have fun messing around with what would usually be considered dramatic moments in any other series like this. Just as an example, one of the party members, Darkness, gets hit with a death curse and she will die in a week. However, Darkness is a masochist and she enjoys the prospect of slowly dying over a week’s time, which baffles the caster. Just when it seems the episode is going to end on a cliffhanger, Aqua uses her healing abilities to dispel the curse, Darkness is saved, and then the credits roll. It’s moments like these that define this anime as something not to be taken seriously at all. It’s there to be very entertaining. The anime starts off at a nice pace, but they begin to rush near the end by quickly introducing characters with little context on how they actually met, making you feel like you missed an episode somewhere. The first time they did it, I actually went back to rewatch the previous episode to see if I somehow missed an entire five minutes, and I didn’t. They just introduced a character with a flashback scene that doesn’t actually exist. It feels really disjointed, especially since the beginning was very well paced.

Speaking of other characters, Kazuma and Aqua don’t travel alone. There is the aforementioned Darkness, who is a masochistic crusader playing the tank role in the party, and Megumin, an archmage who wields a single extremely powerful spell. Aqua herself is an arch priest and the team’s healer, and Kazuma is an adventurer, the worst class possible. This sounds like a great team right? Wrong! Aside from Kazuma, it’s clear these girls have never played a game before in their lives. The only reason they manage to clear quests is because of Kazuma’s leadership, and the fact that the girls are all advanced classes. The girls tout their abilities all the time, but all of them have a fundamental flaw. Aqua is as dumb as a rock, Megumin can only cast her spell Explosion once a day before collapsing, and Darkness can’t hit anything with her sword and her masochist tendencies means she doesn’t even try to dodge attacks. There’s also Kazuma who is very knowledgeable about games, but his class means he has to work the hardest out of everyone in his party. There is a certain charm to all of these characters because of their strengths and flaws, and they make up the bulk of the enjoyment as the fights become absolutely hilarious because of how ineptly the party fights. It takes Kazuma’s game knowledge to complete the vast majority of their quests. There is also genuine camaraderie between the party members as they adventure together and complete these quests.

While there’s not a ton of story, there really doesn’t need to be for a comedy-focused anime. The story that is here, is generally well paced to start, with a bit of rushing near the end. The characters are quirky and have their own likeable points.

Easily the worst part of KonoSuba is its art. While the background art itself is decent, the way the characters are drawn most of the time is awful. Facial expressions are wildly inconsistent, and during the last couple of episodes, sometimes the characters look like they were drawn quickly just to get the episode out the door. In general, the last episodes look like they were just thrown into a blender and they just came out a mess. This is my first time watching a Studio Deen anime, but I’m told this is normal for them. If that’s the case, they need to step up their game. A second season was just announced, so I’m hoping that it looks a lot better in the future.

The animation is half-decent, at least it’s not as bad as the character art. There are some scenes with inconsistent animation, but it’s usually during the funnier scenes, which makes me wonder if it’s on purpose. The OP animation is decent, but the ED animation doesn’t quite hold up. There’s also wholly unnecessary breast jiggling. Not only is it necessary, it’s not even animated well. The animation as a whole is not as bad as the art but I’ll give the aniamtion a pass.

When it comes to this department, KonoSuba isn’t too bad. A mix of veteran voice actors and rookie voice actors were brought in. Rookies Jun Fukushima as Kazuma, and Rie Takahashi as Megumin, complement the veterans Sora Amamiya as Aqua, and Ai Kayano as Darkness. Jun Fukushima got Kazuma’s cynicism down well, and Ai Kayano did well with Darkness, as it seems she always does with any given character. Technically, Sora Amamiya is rather new, but she’s played a bunch of major roles since she broke onto the scene in 2014. Rie Takahashi also just won an award for “Best New Voice Actress” in Japan, and she does do a good job with Megumin. I had no problems with the voice acting for anyone. Aqua can grind on you a bit, but her character is supposed to annoy people, so it’s excusable.

The OP and ED for KonoSuba are also a couple of good songs. The OP “fantastic dreamer” by machico is a nice upbeat song that fits the anime’s tone. The ED, “ちいさな冒険者” (Chiisana Boukensha), sung by the female main cast, is quite different. The ED is a peaceful song with a nice, slow and very catchy rhythm which makes it my favourite ED of the season. The background music is decent, but nothing really special.

KonoSuba was on nobody’s radar to start off the season, but it grew in popularity as the season has gone on thanks to word-of-mouth. KonoSuba is pretty much a perfect anime for those who are into video games and MMOs in particular. It makes fun of video game and adventure anime cliches and provides a barrel of laughs each week thanks to its crazy cast of characters. KonoSuba is a fun-filled adventure that kept me coming back each week to see what crazy stuff its characters would get up to.

+ Wacky and likeable set of characters

+/- Great jokes, as long as you have some video game knowledge

What did you guys think of KonoSuba? Let me know in the comments!