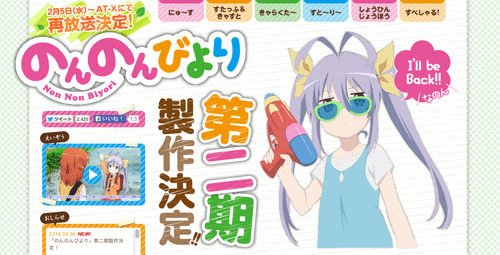 * This review combines both seasons of Non Non Biyori into one.

I’m sure most of you here are urban or at least suburban people. The hustle and bustle of the city, or the suburban life, is portrayed pretty often in anime as it is the life most people experience. Non Non Biyori does something different. Non Non Biyori takes you to the tranquil Japanese countryside where these villagers live quiet lives. The nearest convenience store is over an hour away, no one mans the vegetable stalls, the bus comes every hour, and house locks are non-existent. You may think this setting might lend itself to be inherently boring. Who wants to watch these villagers live their daily lives without the excitement of the city or the trials and tribulations of living in suburbia? However, it means this setting is perfect for rounding out a hard day at work or school. So sit back, and take in the simple life of these four girls living in the remote Japanese countryside.

* The story of Non Non Biyori and its ‘sequel’, Non Non Biyori Repeat, take place in the same timeline, so you can watch these episodes in whatever order you want.

Hotaru Ichijou has just moved from the hustle and bustle of Tokyo to a village in the countryside for her parents’ work. The village life is a shock to her as she discovers that a lot of the things she has come to know have now disappeared or are irrelevant in this new setting. The school she goes to now has only five students, including herself. Her classmates however, welcome her with open arms. There’s Komari Koshigaya and her younger sister, Natsumi, as well as the first grader, Renge Miyauchi. (The other classmate is the Koshigaya’s older brother, Suguru, who is a supporting character and doesn’t say anything.) Komari is the straight man to her younger sister Natsumi, who is the prankster of the family. Komari also has a complex about her short height, which would become a running gag in the series, and she hates it when people mention it. Natsumi is a tomboy that doesn’t believe in studying, and this gets her in trouble with her mom a lot. Renge is a resourceful and well-meaning first grader that is way smarter than your average six-year old. This series is the simple life of these four village kids.

My method for determining a good comedy/slice of life is how likeable the characters are. When there is no story to follow, the characters have to be the stars. Having one or two good characters will usually get a thumbs-up in my book. However, to have a truly great comedy/slice of life, it’s all about something I like to call “character chemistry”. I’m sure you’ve seen how certain characters interact with each other. In a main cast of 4-6 main characters, you’ll usually see two or three characters get along with themselves way better than the other main characters. However, few slice of life anime can bring all the main characters together as one cohesive unit, and make an anime more enjoyable when all of them are together. Non Non Biyori is one of those few, and while I have seen “character chemistry” done better in some anime, it’s a good example of these four girls make a good unit as one as opposed to when it’s just them individually or missing one member. The sections of the anime with all of them together make for great entertainment as their diverse personalities coalesce and good comedy comes from it. It’s one of a few comedy anime I’ve watched where it actually had me laughing for longer than 5 seconds.

However, if you ask most Non Non Biyori fans who their favourite character is, most will likely say Renge. This first grader earns more points for her wit than she does her adorable looks. She stands toe to toe with her older friends and acts more than twice her age, sometimes even being the most mature in the group. She still has the vision of everyone behaving properly and ensuring everyone follows the rules. Or it might be the fact that she greets her friends with the word “Nyanpassu!”. No idea what that means, but that’s Renge’s signature word. She’s usually a part of the anime’s funnier scenes, which gives her a big plus in my book.

Non Non Biyori nails it where it matters: great characters in a slice of life.

The art of Non Non Biyori is pretty well-detailed. I imagine the artists most likely made a trek out to the countryside to get the backdrop for the village of Non Non Biyori. The rolling hills and all the greenery is consistent with what you would see once you leave Japan’s huge urban areas.  It’s a really beautiful anime to look at and take in the sights of the rural communities that are often forgotten in today’s world. There are plenty of shots showing off the rural backdrop of the anime, and it’s always a pretty sight. As for the animation, it’s pretty standard for the most part. That being said, everything is consistent, and I can’t recall any one time where the animation excelled or the quality dropped.

Non Non Biyori is a rare slice of life that has good background music. I think it’s mostly because most slice of life anime lend themselves to regular calm music, but most of the time, it doesn’t match the environment. Non Non Biyori‘s use of simple and calming wind instruments like the recorder, just lend themselves to this rural environment, where life is simple and the touches of the city aren’t anywhere to be found.

Both seasons of Non Non Biyori use the same singers for their OPs and EDs. The OPs, “なないろびより” (Nanairo Biyori), and “こだまことだま” (Kodama Kotodama) are done by nano.RIPE, and the EDs, “のんのん日和” (Non Non Biyori), and “おかえり” (Okaeri) are done by the voice actresses of the main characters. I’m not a huge fan of nano.RIPE; I can’t get into her singing voice. However, I did end up really liking “Kodama Kotodama”, and it’s my favourite song that she’s done. I think it’s because it really seemed to match Non Non Biyori.

The voice actresses do a good job with their respective characters. Kana Asumi (Komari), and Ayane Sakura (Natsumi), help compliment the less-experienced voice actresses of Rie Murakawa (Hotaru) and Kotori Koiwai (Renge). When the original Non Non Biyori aired two years ago, all of them except for Kana Asumi were relatively new, so it’s amazing that they did the great job that they did even when they were just starting out, or at least voicing some of their first main roles.

Non Non Biyori is a perfect anime for helping wind down a hard day of work or school, and it gives you some peace of mind before you end your day. I usually watched Non Non Biyori for exactly this purpose (and so I could write this review on time). Every now and then, we can all use a good healing anime to help calm the nerves and allow us to be ready to tackle the next day. If you’re ever looking for a remedy for your hard life, think of Non Non Biyori. You can’t calm yourself down much more than watching life in the countryside. This series is the perfect slice of life. The only reason you shouldn’t watch this is if you have zero interest in slice of life anime.

So, what did you guys think of the Non Non Biyori series? Let me hear you in the comments!