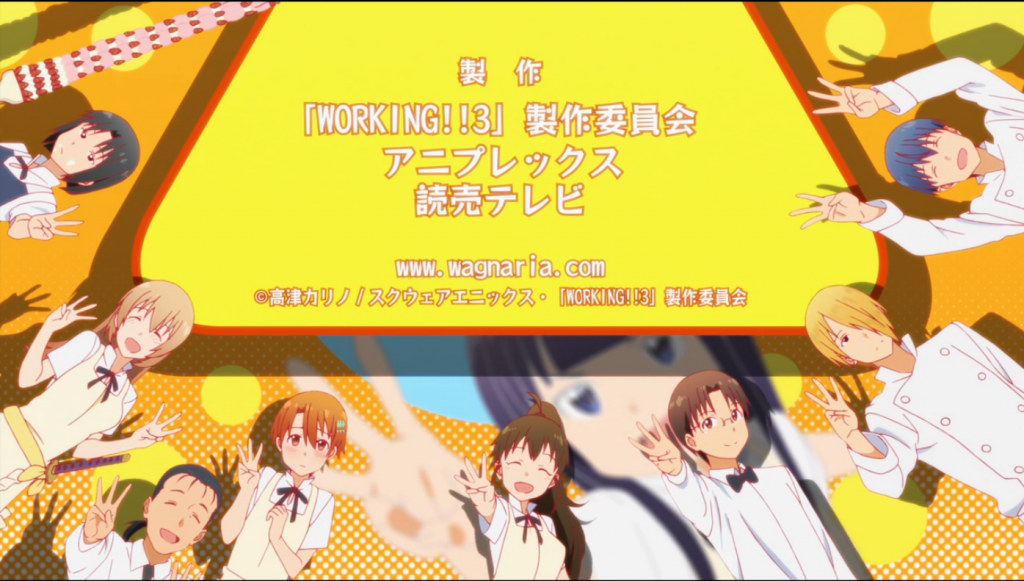 “Welcome to Wagnaria!” Every season begins and ends with this greeting as the employees of this family restaurant greet the camera as it rolls in.  This series has spanned 3 seasons – 5 years, and it has captured the hearts of those who watched it. Working!! has easily worked its way into being one of the best slice of life series in anime history, as it has a low barrier of entry and a very entertaining cast of characters. How Working!! has not reached higher levels of popularity is beyond me. Let me explain how this series has the devoted fanbase that it has today.

Popura Taneshima, a waitress at the family restaurant Wagnaria, overhears her manager, Kyouko Shirafuji, discussing with the lead waitress, Yachiyo Todoroki, that they need to hire another part-time waiter. Popura asks everyone at her school, before eventually resorting to asking random people on the street. The only person who agrees to her random job offer is Souta Takanashi, a regular guy except for the fact that he LOVES small things. So seeing this tiny and adorable girl asking him to work with her, he readily agrees to work at the restaurant. He meets his fellow co-workers: the chefs, the sly Soma, and the serious Jun Satou. He also has a violent encounter with the other waitress, Mahiru Inami, who has a phobia of men and she punches any male who comes within 10 feet of her. Later on in the first season, the final main cast member, Aoi “Yamada”, joins as a waitress. With this crazy cast of co-workers, Takanashi gets ready for a wild time.

Initially, this anime focuses more on humour. This is a legitimately funny anime with a cast that makes it even more enjoyable. Slowly, they start to delve more into the characters themselves. Small character arcs break out in each episode, which usually develops one specific character. As the series goes on, romance develops between some of the co-workers, and this would form the rest of the “story”. The romance development makes up most of the story, with the backstory of the enigmatic Aoi “Yamada” also being a part of the story. Admittedly, not much happens in the development of these stories until the third season, which is when everything got turned up to the next level. Working!!! delivered nothing but closure to every plot hole the previous two seasons left behind. The third season may be the best comedy/slice of life I have ever seen, as it took what made the first two seasons great already, and just filled in everything. The only sour note is the ending of this third and final season, which leaves the final plot hole on a cliffhanger. They aired it just before the end of 2015, with a fun conclusion that wrapped up the last plot point in typical Working!! fashion.

As for the characters, there’s some nice character chemistry here. Obviously, working together brings out a sense of kinship with your co-workers, especially if it’s a small business like this. As I mentioned earlier, the majority of the focus is on the characters themselves. As the series goes on, relationships emerge and a chemistry forms between characters, as it would with your co-workers in real life. You get more attached to some co-workers more than others, but in the end, you’re a team working for the same employer and you need good teamwork to accomplish your goals. The character dynamics are some of the best I’ve seen in any anime, and the cast is memorable and fun to watch. As mentioned earlier, the characters’ relationships with each other are the main draws of the anime and they’re all done well.

With the main story being about the characters, they had to have a strong cast. They more than delivered with that, and this cast of characters is one of the strongest I’ve seen in anime. 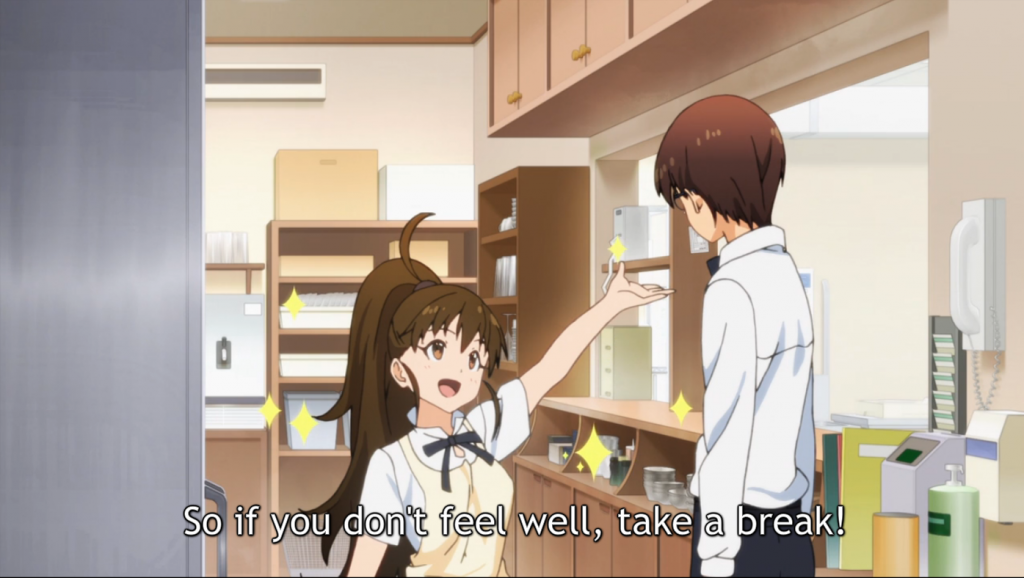 All of Working!!‘s openings (“SOMEONE ELSE”, “COOLISH WALK”, and “NOW!!! GAMBLE” are bright and upbeat, sung by the main cast of girls from the show. The openings are fairly catchy, although to me, they’re not anything too special. The same goes for the ending songs “ハートのエッジに挑もう Go to Heart Edge” (Heart no Edge ni Idomou Go to Heart Edge), “いつものようにLOVE＆PEACE!!” (Itsumo no You ni LOVE&PEACE!!!), and “まつ毛にLOCK” (Matsuge ni LOCK) done by the main male cast. Speaking of the main cast, Working!! brought in a bunch of top talent voice actors for their characters, some of which were just starting off their careers back when the first season aired in 2010. The main cast consists of Jun Fukyama as Souta Takanashi, Kana Asumi as Popura Taneshima, Daisuke Ono as Satou, Eri Kitamura as Yachiyo Todoroki, Hiroshi Kamiya as Souma, and Ryou Hirohashi as Yamada. This is a pretty star-studded lineup whichever way you look at it, and their talent does not go to waste.  There are a couple of music tracks that stick out to me, particularly the ones that play during the humorous parts of the show, but this anime has standard slice of life music for the most part.

You may be thinking that I didn’t write a whole lot for this review, despite me saying it’s one of the best slice of life shows in recent memory. That is because it’s a simple anime, where the pace is steady, and everything is resolved in due time. It’s simply great, and it’s hard to know exactly what I mean until you watch it. The characters and their development help make the show very enjoyable, and it ends on a good note. This is probably the one slice of life anime I would ask someone who is skeptical of the genre to watch. After five years, and three seasons, Working!! has become my all-time favourite slice of life series.

+ Characters are well developed, and their arcs are done very well

Now go out and watch this! Feel free to get back to me later in the comments! 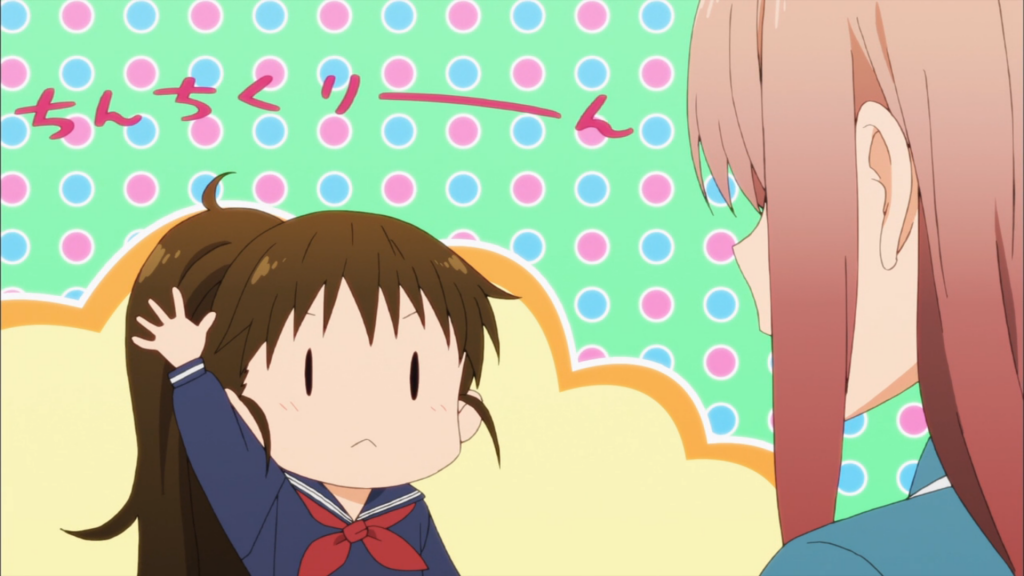