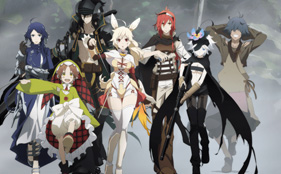 One of the “wild card” anime from this season is Rokka no Yuusha – a wild card in the sense that not a lot know what to expect of it. If the OP and ED animations are any indication however, the show looks like it would be great!

The opening animation features beautiful visuals showing off the diverse cast of characters as they traverse a unique setting. Am I the only one getting Log Horizon flashbacks? Not that it’s a bad thing! The OP track is “Cry for the Truth” by Mich, an upbeat Jrock track that blends well with the fluid visuals and vibrant colors. Check it out below!

An equally beautiful, serene ending animation with a fairly unique ED: “Secret Sky” by Mich, caps off the ending nicely. While the animations look nice in their own right, the melodic track is what really makes this one amazing. Check out what I mean by clicking below!

The Rokka no Yuusha anime adaptation began airing this Summer from Sunday, July 5th at 4:58am JST on MBS. The anime will also air on AT-X on the 5th at 5:00pm JST, on Tokyo MX on the 8th at 11:30pm JST, and from BS11 on the 11th at 11:00pm JST. The series will also be streamed online on Niconico, GYAO! and on Bandai Channel.

The main cast of Rokka no Yuusha is:

The series itself will follow the story of the original LNs and will follow the character and art designs of the manga adaptation. The main members of the anime’s production staff were earlier revealed and include:

Synopsis of Rokka no Yuusha from Haruhichan: