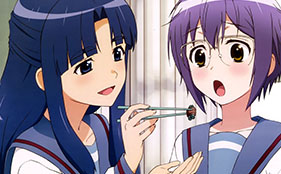 A new key visual for the upcoming anime adaptation of Nagaru Tanigawa and Puyo’s The Disappearance of Nagato Yuki-Chan (The Vanishing of Nagato Yuki-Chan) has been revealed in the March issue of NyanType. The new visual features Ryouko Asakura and Yuki Nagato sharing their lunch together.

Another visual was also revealed in the February issue of NewType last month.

The main cast of the upcoming series was also earlier revealed and features the return of the cast from previousHaruhianime: